The day I sat down with Joyce Appleby to discuss her latest book she told me she’d just received in the mail that day a box containing copies of her previous book, The Relentless Revolution: A History of Capitalism (W.W. Norton, 2010), translated into Chinese. I suddenly imagined countless Chinese students now reading about capitalism as written by the American historian and scholar Joyce Appleby. Clearly she has, and has had, a worldwide reach.

The author of nine academic yet eminently readable nonfiction books, Joyce, now 85, taught history at UCLA for twenty years, before retiring to Taos, NM, in 2012 to be near family. Her latest book, Shores of Knowledge: New World Discoveries and the Scientific Imagination, which Joyce just learned has been nominated for the 2014 Phi Beta Kappa Ralph Waldo Emerson prize (for books in history, philosophy, religion, and the social sciences), was published by Norton last year. When I asked her whether she was working on another book, she told me, “No. I’m just enjoying reading other people’s books now.”

One of the driving themes that runs through Shores of Knowledge – an engrossing history of the voyages of exploration and discovery from Columbus to Darwin — is the concept of curiosity. “Prior to these explorations, isolation and religious disapproval in Europe had curtailed curiosity for over a millennium,” she said. “These explorers – and the men who wrote about their exploits – changed all that.” 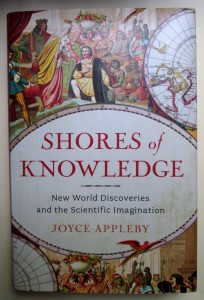 From Shores of Knowledge:

In the twenty-first century, we know that if we don’t know something about a natural phenomenon, some expert does. Three centuries ago that was not the case. Talented amateurs might be the first to describe an ocean tide or a rare flower. Discoveries provoked delight. Yet the knowledge gained produced ever more questions, pushing out the frontiers of knowledge. It was like hiking higher and higher up a mountain and seeing more things than one could before (p. 132).

In her own life, curiosity has always been a driving force, Joyce told me. “Curiosity is life’s engine, from the age of three on. It can lift you out of your doldrums. Curiosity is very important to me. I’m curious about everything. In fact, before I go to bed at night I write notes about the things I must Google the next day.”

Last fall, on her author tour for Shores of Knowledge, Joyce sat down with Bill Moyers, who also was quick to pick up on the curiosity theme. (See the 30-minute segment at: billmoyers.com/segment/joyce-appleby-on-curiosity/.) In their lively, brilliant exchange, Joyce told Bill the same thing she told me: “I taught my history students at UCLA that everything they learned was the answer to someone’s curious question.”

It was, of course, no surprise to me to hear Joyce’s answer to the last question I put to her, What would the gist of your commencement address at a women’s college be?

“Follow your curiosity,” she said. “Stay focused on your goals, and don’t go off track.”