When my friend Suzanne — with whom I went to high school in New Jersey in the early ‘60s, but who now lives in San Miguel de Allende, Mexico, like me — came to lunch last Tuesday, she told me about a marvelous group of remarkable women here known as Ser Mujer (“to be a woman”), and a special project they were planning for this year’s International Women’s Day on March 8th.

This project, titled “En Los Zapatos de Ella” (“in her shoes”), is one of many important programs slated for this year’s International Women’s Month in San Miguel (see Events at  www.sermujersma.com ).

“En Los Zapatos de Ella,” Suzanne told me, would be an outdoor art installation of hundreds of pairs of women’s worn (donated) shoes hanging by red satin ribbon from the façade of a large home in the Colonia Guadalupe district of San Miguel – each pair of shoes representing one of the 303 homicides targeting women in Mexico’s State of Guanajuato alone in 2019.

As I learned from Suzanne, Ser Mujer is a group of about eighteen Mexican, North and South American, and Canadian women of all ages, working in partnership with community-based organizations in SMA, who are all committed to social justice, equal opportunity, and the elimination of violence against women.

Over lunch here Suzanne explained to me her involvement in the March 8th “In Her Shoes” event:

When she joined Ser Mujer last December, Suzanne was asked to bring her years of U.S. corporate management skills to bear in helping to manage and direct this art installation.

“So I wrote up a concept statement,” she told me, “and I put together a loose project plan – everything that needed to be accomplished, and so on, the way I would organize a project if I were in corporate America.”

What Suzanne hadn’t bargained on, though, was that as she presented her plan several lively conversations broke out among the women, all relevant to the subject, and all moving the ball rapidly along. When the question of where the installation should be held came up, for example, one Mexican woman took out her cell phone, right there at the meeting, called her friend the artist Tomas Joaquin Burkey Marambio, and got him to commit to use his house in Colonia Guadalupe. Done.

“This is what I perceive as the Mexican attitude of CAN DO,” Suzanne said. “There’s nothing too daunting. I’ve seen it time after time here in San Miguel. And I feel it every time I meet with these women. I always come out of Ser Mujer meetings feeling touched by their energy, their accomplishments, and their ability to make things happen. I’ve not experienced this in the same way in any other group that I’ve worked with in the United States.”

Suzanne and I agreed that we’d never celebrated – nor even known about – International Women’s Day when we lived in the States. Although it had been celebrated in other countries for years, it wasn’t until 1975 that the United Nations began acknowledging International Women’s Day, and in 1977 the U.N. General Assembly proclaimed it be held on March 8th each year. But in the U.S., where domestic violence is also rife and women are still largely treated as subordinates, the day has been generally ignored.

My first experience of International Women’s Day’s global importance was in francophone and predominantly Muslim Mali, West Africa, where La Journée Internationale de la Femme  (International Women’s Day) was widely celebrated. As I wrote in my memoir How to Make an African Quilt: On March 8, 2000, I brought my Club Crochet girls – about thirty Malian girls between the ages of eight and twelve, who met at my my home each week to learn how to crochet using “yarn” made from plastic bags – to a women-only gathering at the women’s group where I taught quilting, for a day-long manifestation (event). There was laughing, dancing, singing – and eating, of course – and general celebration of our shared female-hood.

On our way to that event, I’d taught the girls a made-up marching song in French: “Nous sommes les femmes et nous sommes fortes!” (“We are women and we are strong!”), stopping to stomp our collective feet on the dusty street at every “fortes.” I felt I was leading a mini-revolution.

I must confess, Suzanne and I were not close friends in high school. In fact, I hardly knew her then. World War Three was being waged in my home at that time, so I had no energy left for socializing or after-school activities when I was a teen. I had other important obligations, such as shielding my mother from my father’s drunken blows. As soon as I was old enough, tall enough, and strong enough, I, as the eldest child still at home, made a point of silently standing in front of her when he came at her swinging. I knew he wouldn’t strike me; I wasn’t the object of his rage. So, like an enormous, deflated, wild beast, he would stop roaring and slink away.

This is what it is to be a woman in the world today: We must be strong, stand up for ourselves, and communicate coolly and clearly to all men everywhere:

No more violence against us.

No more disrespect toward us.

This is not a competition; men and women are meant to complement each other, in equal measure.

Come, walk for a day in our shoes. 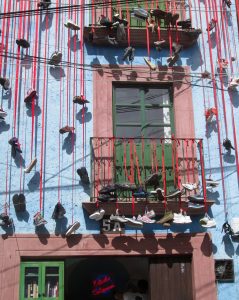 (Please visit Ser Mujer’s website to learn more about their impressive members and their upcoming events here in San Miguel in this International Women’s Month. Also, be sure to read the informative essay, “What is Femicide?” by Paula James. Go to: www.sermujersma.com .)