The shoes I wear were made for running, but I don’t run anymore. I walk.

I used to run along the Hudson River in Riverside Park — noticing little except the expanse of water and the overarching sky and the birds overhead — feeling like a bird flying away. Until, after a few miles, reality would hit me and I knew I had to turn and run back to my studio apartment on Riverside Drive, dripping with sweat.

But that was then in New York, and this is now in San Miguel de Allende. Here and now I wear my running shoes to go for long walks every day. I need to get away from this computer screen and use my eyes to take in everything around me. I need to remind myself that I live in beautiful old Mexico now and that Mexico, like an ancient brown-skinned woman in a weathered rebozo, has embraced me.

There is so much to see here, so much to admire and absorb when you walk the streets in daylight. Yes, hotels, restaurants, and galleries are beginning to reopen, with guards at their doors making sure the entrants are wearing face masks and wiping their feet on the disinfectant-filled mats, taking their temperatures with a pistol-like device, urging the application of hand-sanitizing gel, and insisting that everyone sign in (presumably for contact-tracing purposes).

But I prefer to remain outdoors, beneath the glorious blue sky, with my running-shoe-shod feet firmly on the ground. I still walk briskly like a New Yorker, but I see much more now than I would if I were running past it.

Here are just some of the things I’ve seen on recent walks:

But the piece of art that stopped me in my tracks on a recent walk was this sculpture on the grounds of San Miguel’s art and design center, Fábrica La Aurora: 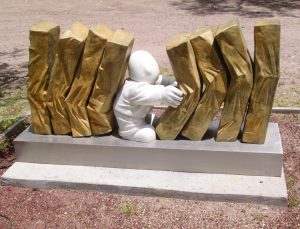 I may have passed it many times before, but this week it spoke to me. The funny little man, nicknamed Timo (from Timoteo, or Timothy) by his creator, Mexican architect-turned-sculptor Rodrigo de la Sierra, I learned, represented how I – and many others, I’m guessing – have been feeling of late: squished between what was and what appears to lie ahead during this coronavirus pandemic. Timo is trying hard not to be engulfed. We want to cheer him on. 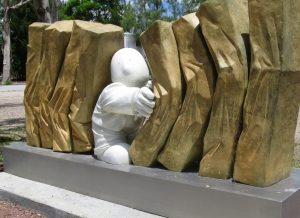 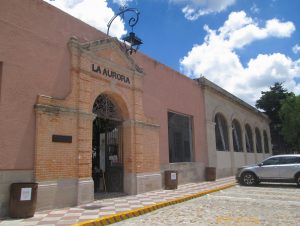 There are Timos in boxes, trying to get out; Timos marching single-file bravely off to war, with scythe-bearing Death following up the rear; Timos in rowboats with no oars, and many more. 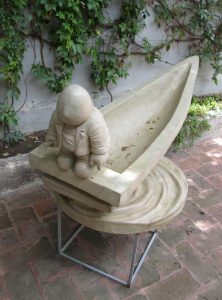 In each, this comic figure at first captures our childish imaginations, then he makes us think about the harsh realities of adult life. As one art critic put it, “With a closer study of this character [Timo], one sees a seemingly comic veneer interpreting some real serious stuff.”

Art, I feel, is meant to speak to us and for us, on a mostly visceral level. De la Sierra’s Timo spoke to me wordlessly this week on one of my solo walks and made me feel less alone.

For more about de la Sierra and his work, visit his website: www.rodrigodelasierra.com as well as the gallery in SMA where many of his Timos are on display: www.interseccionart.com .