It’s still officially winter in the central mountains of Mexico, and in recent weeks the weather has been especially overcast and cold. But this past Tuesday was like a welcome summer’s day – with clear, sunny skies, near-80-degrees (F.) temps, and just a hint of an autumnal breeze. And the fact that I spent the afternoon at the Candelaria fair, an annual rite of spring here in San Miguel de Allende for the past sixty-four years, made it a day for all four seasons rolled into one for me.

In previous years the Candelaria plant-and-flower fair has been held in Parque Juarez, a charming, lush, early-20th century French-style city park just a five-minute walk from my apartment. But this year, because Parque Juarez is in the process of being torn apart and restored to its original splendor, the  Candelaria, which began on January 30th and lasts until February 16th, is being held at the newly inaugurated Zeferino Gutierrez Park.

This new park is a forty-five-minute hike from my home, but on Tuesday it was well worth the trek there and back. I drank in the beauty of the fair’s thousands of flowers, thrilled to the throngs of happy Mexican children playing on the vast park’s lawns, almost danced to the music coming from seemingly everywhere. And I learned things, too:

Zeferino Gutierrez Park was named in honor of the indigenous bricklayer and self-taught architect who was responsible for the current Gothic façade of San Miguel’s iconic Parroquia church. According to Wikipedia, “It is said Gutierrez’s inspiration came from postcards and lithographs of Gothic churches in Europe; however, the interpretation is his own and more a work of imagination than a faithful reconstruction.”

Here are some of my many photos taken Tuesday at the Candelaria fair in Zeferino Gutierrez Park, to help you believe that spring is really on its way, wherever you may be: 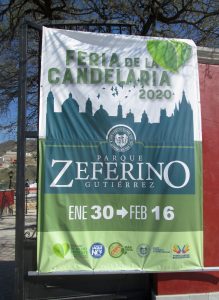 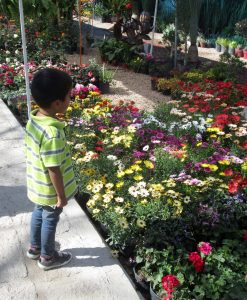