You may not guess this from its somewhat downbeat title, but Will Schwalbe’s The End of Your Life Book Club (Knopf, 2012) makes one’s spirits soar. By turns poignant, enriching, inspiring, and funny, this book is a must-read for every true-blue book lover, especially those book lovers who belong to book groups. (Yes, Ladies-of-a-Certain-Age, who still read real books and gather to discuss them, I’m addressing you.) 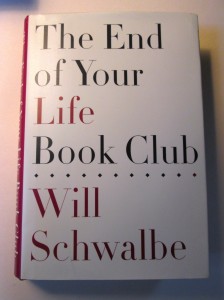 Will Schwalbe, who was at the time of his mother’s cancer diagnosis a 45-year-old publishing executive in New York, was able to take time off from his job and accompany his beloved mother for her monthly treatments at Memorial Sloan-Kettering’s outpatient care center on 53rd and Third. To pass the time (sometimes many hours) in the waiting room, they formed a special book club – just the two of them – where they discussed and dissected the books they’d chosen to read over the previous weeks.

Will’s mom, Mary Anne Schwalbe, a dynamo at 73, had returned to New York from one of her frequent humanitarian missions to Afghanistan for the International Rescue Committee feeling especially unwell. At first diagnosed with a rare type of hepatitis, she was later found to have Stage Four pancreatic cancer. “Treatable, but not curable,” she was told. Her prognosis was grim: three to six months.

Schwalbe’s beautifully written tribute to his remarkable mother begins with her diagnosis in 2007 and takes the reader with him on a two-year journey of love and discovery. Was it her adoring and supportive family (Will was one of three devoted siblings), the best-in-the-world treatment she received, or this one-of-a-kind book club that buoyed and sustained her for two full and happy years? We’ll never know for sure, but I have my own hunch.

This is a love story – the love between a brave, smart, courageous, trailblazing woman and her bright, sensitive son – as well as the story of their mutual love of books and how those books gave them an added way to connect and deepen their already deep connection.

I won’t spoil it by giving you their whole, wide-ranging reading list or by telling how their lively book discussions broadened their respective worlds and provided them both hope. Will writes, “In the summer [soon after her diagnosis], Mom and I had read slender books. Now we were reading one long book after another. Maybe that was a way of expressing hopefulness – you had to have a lot of time left if you were going to start reading Bolaño, or Thomas, or Halberstam.” Instead, I’ll let you have the singular pleasure of discovering their chosen books the way they did — naturally, organically.

One of his mom’s quirks as a reader, Will tells us, was that she always read the ending of a book first. She liked to know where the book was going. So in that spirit, because she would approve, I’ll share with you a passage from the last chapter, when Will is standing by his mom’s deathbed:

“…I looked around at Mom and Dad’s bedroom – and at Mom, resting relatively peacefully, but with that rasping breath that means there isn’t much time left. She was surrounded by books – a wall of bookshelves, books on her night table, a book beside her. Here were Stegner and Highsmith, Mann and Larsson, Banks and Barbery, Strout and Némirovsky, the Book of Common Prayer and the Bible. The spines were of all colors, and there were paperbacks and hardcovers, and books that had lost their dust jackets and ones that never had them.

“They were Mom’s companions and teachers. They had shown her the way. And she was able to look at them as she readied herself for the life everlasting that she knew awaited her….”

And this, from the book’s Epilogue, on the very last page:

“Mom taught me that you can make a difference in the world and that books really do matter: they’re how we know what we need to do in life, and how we tell others.”