“It’s a very ancient saying,” according to Oscar Hammerstein’s song “Getting to Know You” (from the 1956 musical The King and I), “but a true and honest thought, that if you become a teacher, by your pupils you’ll be taught.”

I was reminded of this ancient truism this week when I joined a small group of good-hearted gringas from San Miguel de Allende (Toni, Ann, and Diana) and returned to ABBA House in Celaya, about an hour and a half’s drive away, to teach knitting and crocheting to the long-term residents there.

(For the story of my first visit two weeks ago to this safe house for migrants, please see my previous post on the subject:  www.bonnieleeblack.com/blog/ABBA-House .)

When we four women walked in, I noticed a young man, a new resident, sitting slightly apart from the others, his aluminum crutches beside his chair, who looked to me to be forlorn. He (for privacy reasons, I’ll call him Juan) had joined the other residents that afternoon to learn how to crochet. He was a rank beginner (principiante), I was told, and I had come to teach beginners.

In the two weeks since I was last there, the other residents had made impressive progress – knitting and crocheting colorful scarves and cloche hats for themselves in advance of the colder weather. Here is a photo I took of one section of the long harvest table where they all had gathered to work on their new craft: 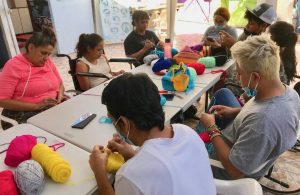 My fellow-teachers (better knitters/crocheters than I am) joined the residents at the table, while I gravitated to my new student at the periphery, Juan. I pulled up a chair and sat beside him, introduced myself, and, slowly and painstakingly (the way I like to be taught new things), showed him the simple-yet-seemingly-intricate step-by-step process.

I didn’t pry into Juan’s personal story because his wounds, both psychological and physical, appeared to me to be too fresh. We stuck to the crocheting. I just assumed, like the other migrant-amputees at ABBA House, that this young man from Honduras had lost a lower limb falling from the rooftop of “la bestia” (train) in his desperate flight north.

I assumed, too, that Juan had never before held a crochet hook in his strong, workmanlike hands, and his willingness to learn went far beyond crochet: 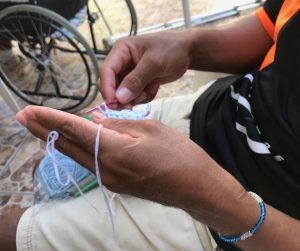 As I showed him each move, like dance steps with hands, hooking the yarn, pulling it through, looping it over, pulling again, in, over, out, and so on – going backward a bit before going forward – Juan paid close attention. And as he learned from me, I learned from him. He was determined to get it. He did not give up in frustration. He persevered. He made steady progress. He smiled with pride and sat straighter in his chair when I sincerely praised him, “Muy bien!” and “Bravo!”: 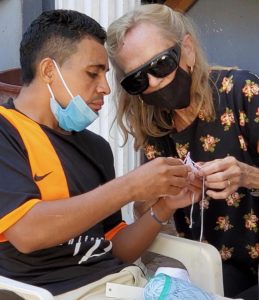 According to the CGOA (Crochet Guild of America), there is “no convincing evidence as to how old the art of crochet might be or where it came from.” Some research suggests that crochet “probably developed most directly from Chinese needlework, a very ancient form of embroidery known in Turkey, India, Persia and North Africa, which reached Europe in the 1700s.” (For more on the theories of its origin, go to: https://www.crochet.org/page/CrochetHistory .)

But in my imagination, the story goes way, way back: I envision a hunched cave woman studying a spider web, then trying to replicate it with her hands, holding a hooked stick in one hand and a long, thin filament in the other. In her stubborn determination – up and down, back and forth, loop and pull — she creates a netlike web, then runs to tell her mate – in whatever pre-language they used to communicate – “Look what I made with my hands! It is useful! You can use it to catch fish!” And from this point forward, that woman walked taller.

I like to imagine that Juan’s great success on his first day of learning to crochet, driven by his willingness, patience and determination, will help him to walk a little taller on his aluminum crutches, with “Muy bien!” ringing in his ears.

Thanks to several WOW readers’ generous donations, we were able to purchase and later bring with us to ABBA House dozens of skeins of colorful yarn for this ongoing knitting/crocheting project.

If you have not already done so and you’d like to play a meaningful role in helping these brave people heal, please go to:  https://www.GoFundMe.com/abba-house-sanctuary-for-migrants-and-families/  and earmark your donation accordingly.