It’s fun, I sometimes think, especially at this stage of life, to wonder about the What-Ifs: What if, for example, I had had the self-confidence to refuse that older man’s pressing marriage proposal when I was so young and naive?… What if I’d stayed in that well paying job in NYC until retirement?… What if I’d emigrated to France in 2001, as I had so hoped to do?… What would my life look like now?

And today I’m thinking: What if I’d pursued different course work in college and graduate school, such as Cultural Anthropology and Comparative Religions, subjects that have always interested me and intrigue me still? Surely (to answer my own question), I’d know what I was doing now, instead of bumbling along as an anthropologist-wannabe who studies other cultures and religions through inexpert, first-hand, on-the-ground observation at every opportunity.

When it comes to religion, I’m especially curious to know: What makes people follow one religion over another, then claim theirs is supreme? Is it just a matter of cultural identity? Family pressure? Habit? Hunger? Other?

In my own experience, it’s been hunger. As a young person growing up in the suburbs of New Jersey, hungry for more life guidance than I knew I could get at home, I attended a local Bible church on my own, where I learned how to walk the walk – and learned, too, all the words to their comforting, old-time hymns.

Much later, living in New York, I sometimes went with a Jewish friend to his mother’s synagogue in Forest Hills, and I marveled at the way the darkly dressed men in the congregation swooned when they prayed. Between the two of us, my friend and I felt no religious differences; we knew we believed in the same big God.

Still later, in my two years in the Peace Corps in Gabon, Central Africa, I went every Sunday to the Christian Alliance church in my little town, where the dignified, elderly, business-suited Gabonese minister preached for one solid hour every week in Inzebi, a language I didn’t speak.

But that detail didn’t matter to me.  His body language – arms reaching up to heaven, then stretched out to embrace us all; his warm smile and gentle, wise demeanor – spoke clearly to me of God’s love.

As I described that experience in my Peace Corps memoir, How to Cook a Crocodile, I thrilled at that large congregation’s lively four-part singing; their rhythmic clapping and swaying; the colorful ensembles the African women wore; the darling, well-behaved Gabonese children perched along long wooden benches on one side of the humble sanctuary, wearing their only-worn-on-Sunday shoes.

Sometimes we in the pews were asked to sing the beloved old hymn, “How Great Thou Art,” in our first language – whether that language was Inzebi, Bateki, Banjabi, French, or English – and I, the only white person there, would be the only one singing in English: “Oh Lord, my God, when I in awesome wonder/ consider all the worlds Thy hands have made/ I see the stars, I hear the rolling thunder/ Thy power throughout the universe displayed…” I never felt like an outsider.

Later, living and working in predominantly Muslim Mali, West Africa, head covered respectfully, I bowed low and prayed with my Malian Muslim sisters at the funeral of our dear friend. And every morning for the three years I lived there I read inspiring passages from my English-language translation of the Koran as part of my morning devotions. “Allah,” I came to learn deeply, is simply another name for God.

Although Mexico is a devoutly Catholic country, and in San Miguel there is a big, beautiful, old, ornate Catholic church at every turn, the most majestic of which is the Parroquia in centro, soaring above this colonial city like the Eiffel Tower does in Paris, I have yet to attend a Catholic mass here.

I’ve been to Catholic services in New York, Paris, and elsewhere in the world, so I’m assuming the solemn ceremonial aspects are the same everywhere and in all languages. One day, when my Spanish improves, I’ll go to mass at the Parroquia to test my assumptions and perhaps learn what is taught in the Catholic church here.

In the meantime, I’ve been visiting Sunday-morning services attended by my fellow English-speaking gringos:

I’ve gone to the Unitarian Universalist Fellowship of San Miguel, which meets in the large, airy ballroom of an old hotel in centro and never fails to provide an intellectually enriching program to the ever-growing, widely diverse and inclusive group.

I’ve also attended the Community Church of San Miguel, an interdenominational Protestant church that meets in a rented space just on the edge of town. This congregation is made up of warm and friendly mostly older (my age) couples, who appear to be lifelong churchgoers who wouldn’t dream of doing anything on a Sunday morning other than going to church and singing those sweet, old, familiar hymns.

Most recently, though, I thought I’d try the Quakers, listed in San Miguel’s weekly newspaper Atencion under Spiritual Meetings with the tagline, “All are welcome.” A bit of online research beforehand taught me that Quakers eschew any form of showy ritual in their worship, wholly embrace equality between the races and the sexes, and thoroughly oppose war.  Quakers, I learned, call themselves “Friends” and like to keep things simple. All very appealing to me. 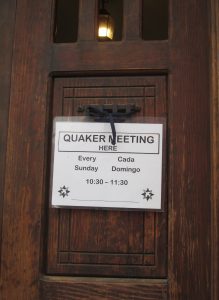 It was an unusually chilly, drizzly, overcast late-January morning, much more like London than San Miguel. I arrived at the venue – what appeared to be a private Mexican-family’s home borrowed for this occasion – just before the front door was closed and the service was set to begin.

Seven straight-backed chairs were placed in a circle under a faux-gold chandelier. There were only four of us there, three women and one man, all gringos about my age.

They must have thought I was a Quaker visiting from the States, because I received no explanations. We four simply sat, eyes closed, feet flat on the tile floor, hands in our laps. For an hour.

Except for the hum of a refrigerator somewhere, and the chirping of birds in the adjoining courtyard, and the involuntary sounds human bodies make – a stifled cough, a covered sneeze, and the loud rumbling of my stomach – there was silence. No music. No sermon. No talking at all.

I quickly assumed we were supposed to be praying. But I had already had what I call my “morning ritual” of reading some of David’s Psalms and praying to (my conception of) God earlier in the morning. My God had already heard my daily cris du coeur, my long list of requests (for patience, tolerance, strength, compassion, wisdom…), plus my even-longer list of thank-you’s (for friends far and near, distant family, relatively good health, life in Mexico…), so I had to think of something else to occupy the hour.

I decided to sing hymns in my head, drawing on decades-old memory, such as this old favorite: “Be still my soul, the Lord is on thy side./ Bear patiently the cross of grief or pain./ Leave to thy God to order and provide./ In every change He faithful will remain….”

Then I did a long stretch of deep-breathing exercises. Then I formulated my To Do list for the rest of the day… and the week. Clearly, I realized, I’m not cut out to be a Buddhist nun.

At about the fifty-minute mark, I had to open my eyes and glance around the room (without moving my head), while the others were deep into doing whatever they were doing with their eyes shut tight.

I saw framed family photos covering one wall – happy Mexican children, handsome newlyweds, somber grandparents. I saw large potted ferns reminiscent of a Victorian parlor. I saw two little birds (sparrows?) sneak under the door from the courtyard and fly around the living room. (None of my fellow-Friends appeared to notice.)

When I told a Mexican friend this week that I’d been to a Quaker worship service on Sunday morning, she thought I was joking. “Quaker?” she said. “What does that mean? Do they serve oatmeal porridge instead of communion?”

Come to think of it, there is, in a way, a Goldilocks quality to my quest. You might say I’m searching for the perfect “bowl” of nourishing spiritual “porridge,” in a place that will feel “just right,” in a religious community where I feel I belong.

But on the other hand – and more realistically – perhaps quasi-anthropologists like me are not meant to “belong.” Perhaps we’re destined to be dispassionate observers, mental note-takers, cool-headed questioners.

One of my biggest questions over the years has been: Why all the religious divisions, animosities and cruelties in this world when most religions preach love and peace?

The words of Rodney King after the Los Angeles race riots of 1992 come to mind: “Please, we can get along here. We all can get along. I mean, we’re all stuck here for a while. Let’s try to work it out.”

Maybe-maybe-maybe, if our spirits live on, on the other side of this corporeal life, there’ll be no more divisions, we will have learned to “work it out,” and we’ll all call ourselves friends. As my Mexican friends say, “Vamos a ver.”