My dear old friend Marty, who is a photographer, used to say that we’d like our new driver’s license photos in ten years. I thought of that this week when I had passport-size photos of myself made at the Post Office here in Taos to comply with the residence-visa requirements for the Mexican Consulate. When I looked at these photos — front and side views, like police mug shots — I hardly recognized the person I saw. She bore little to no resemblance to the woman I tend to smile at in the bathroom mirror when I fluff my hair. This woman looked really old, bedraggled, and totally stressed. And I’m sure I’ll say the same in ten years.

In all fairness, the woman in these official photos was indeed having a stressful day. She’d been racing around town on foot (she’s sold her car) in the first snowstorm of the season, under-dressed for the nasty weather (she’s already given away her warmest winter coats), shivering (and cursing the snow), trying to gather all of the documents needed for the visa process: Six months’ worth of recent bank statements from her bank, birth certificate from her safe deposit box, duplicate copies of her passport and various other papers, plus these unrecognizable photos.

(It’s not vanity, I tell myself; it’s a matter of identity. Who is the woman in these photographs?) 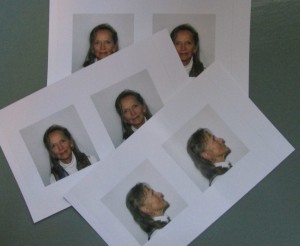 Will I qualify for the “temporal” residence visa, which should lead to the “permanente” in a few years’ time? That’s anybody’s guess, I’m told, because the requirements change regularly, and the rules vary depending on which state’s Mexican Consulate you visit, who you see there, and what sort of mood that person is in that day. I’ll know more next week when I go to the Mexican Consulate in Albuquerque. Vamos a ver (we’ll see), as the Mexicans say — an expression in Spanish I’ve recently come to use a lot.

It may seem ironic to some Americans, but getting a visa to live legally in Mexico isn’t easy. The key words here are “live,” as in staying on, not just whizzing through as a tourist, and “legally,” as in complying with all their bureaucratic red tape. This is true, I believe, for most countries. Another personal example: When I sought a visa to live in France in 2000, rather than return to the U.S. after I left Mali, West Africa, I found the hurdles insurmountable. I learned that only the independently wealthy need apply, which certainly excluded me.

Let’s face it: The country of our birth tries to own us. As schoolkids in the USA, we stood beside our wooden desks, placed our right hands in the vicinity of our hearts, and pledged allegiance to our classroom’s beautiful red-white-and-blue flag, reciting words that we could hardly define. What in the world did “pledge” mean to a seven-year-old? And “allegiance”? No teacher that I can recall ever explained. We were, however, rightly proud of the “liberty and justice for all” part. That sounded good, and embracing.

But time, knowledge, and world travel change a person’s worldview, I’ve discovered. My allegiance now, after having lived outside of the USA for a significant portion of my life, is to the world as a whole. Despite my accidental birth in Jersey City, New Jersey, USA, in 1945 (my father told his four children repeatedly that we were “mistakes”), no country owns me; I choose to call myself a citizen of the world.

Another of the documents requested for the Mexican visa I’m hoping to get is a letter, in Spanish, explaining why I want to live in Mexico. I wrote this letter yesterday, looking up every other word in my handy Spanish dictionary. I wrote that I very much liked Mexico’ beauty and culture — its food, music, art, literature, and dance. I said I admired its ancient, proud history. I confessed to preferring its warmer climate (no snow!). I said I was drawn to Mexico’s — and the Mexican people’s — heartfulness and soulfulness.

What I didn’t add is that the 70-year-old American woman pictured in these new, official photographs is recently retired — and tired. (It’s written all over her face.) She’s tired of America’s rat race, tired of its divisive politics and widening economic inequality, tired of its racism, sexism, and ageism, tired of the fact that “liberty and justice for all” isn’t altogether true anymore (if it ever was), and she’s powerless to change any of it.

Well, what more can I say? Vamos a ver.