“Lo siento” (I’m sorry), la dueña said to me when I returned from my weekly grocery shopping at La Comer that Sunday afternoon. Uh-oh, I thought, as she proceeded to explain to me what had happened, and I strained to understand her too-fast Spanish.

I grasped something about a loud crash she’d heard coming from my patio area (she pointed to my apartment above hers), due to the ferocious winds that had picked up while I was out. She hadn’t gone up to check on what had broken. She just wanted to warn me.

“Oh… Well… Vamos a ver!” (We’ll see), I said jauntily as I carried my grocery bags up the curved staircase.

I was relieved to see that all seven of my heavy, potted plants on the patio ledge were still there, pretty as a picture. Whew, I thought, the wind wasn’t strong enough to knock them down.

And then I saw it: My beautiful blue glass hummingbird feeder, which I’d only recently installed here at this new (to me) apartment, had obviously been lifted up like a delicate china cup by the angry wind, sent crashing down on the cement-floored azotea beside my patio and broken into a million minute baby- blue shards. 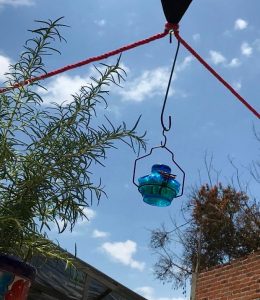 I reported this accident to la dueña (the landlady), remarking “es la vida!” (that’s life!), with a shrug, but also adding that hummingbirds (colibríes) are my mascotas (pets), and I’d be sad if they didn’t return. (In terms of mascotas, she has two large, deep-throated guard dogs who live in her garage, while I have countless — or should I say uncountable? — visiting itinerant hummingbirds who live who-knows-where.)

I didn’t explain to her – because I simply don’t have the vocabulary in Spanish – that I love hummingbirds more than any other winged or four-legged creatures. I am in awe of their abilities and their design. They’re the smallest (no bigger than my thumb) and fastest (relative to their size) birds, and the only birds capable of flying backward. They have big brains, extraordinary vision, and (the males have) brightly colored plumage. They’re a joy to behold. Mesmerizing.

So, after cleaning up the mess wrought by the wind, I began my quest to replace my cherished glass hummingbird feeder with something more durable and unbreakable; namely, plastic. For two days I shopped all over San Miguel for a plastic comedero de colibríes (hummingbird feeder), with no luck. So I ordered one from Amazon online. But what would I – and my beloved colibrí pets – do in the weeks it would take to arrive? How would we survive?

As I’d anticipated, the colibríes who’d become accustomed to feeding at my trough became irate with me. They fluttered their humming wings, circling around the space where the glass feeder had been, chirping, squeaking and squealing, then flew within a foot or two from my face and hung there in the air, flapping at an eye-blurring rate (more than fifty times per second!) giving me lip. “Where’s our comida?” (food), they seemed to be demanding, as I sat on my patio reading a good book.

I slinked inside. They left in a huff.

An impulse that had been lying dormant since my Peace Corps days in the rainforest of Gabon twenty-five years ago woke within me: When you can’t buy something that you need, become resourceful and make it. I would MAKE a plastic feeder for them!

I still had the metal frame from the glass feeder, I was able to buy two red glass feeding tubes from the shop in town that sells glass feeders, I knew how to poke holes in plastic bottles (with the point of a screw driver heated over a gas flame – also learned in Africa), and I had some handy sturdy string and (can’t-live-without-it) duct tape. So I spent an afternoon rigging up this feeder, and I proudly hung my handiwork out for my colibríes: 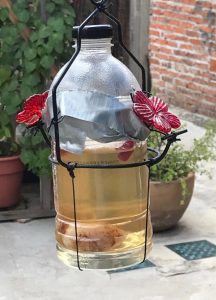 Alas, no luck (no suerte). No takers.

Undaunted, the next day I tried making another, smaller, design: 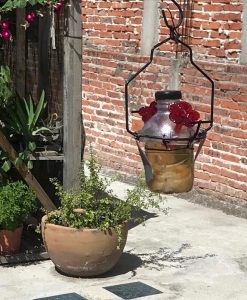 Hummingbirds are wary little beings, slow to trust, always nervous and questioning. (I can relate; I’m the same way.) They seemed suspicious of my homemade contraptions, as if asking, “What in the world is this?” They wouldn’t risk even trying.

Then, in the nick of time, my Mexican friend Ramiro came to the rescue. In his travels he found a plastic hummingbird feeder in the nearby city of Leon and brought it to me here in San Miguel last week. It’s red (hummingbirds’ favorite color) and shaped like an enormous raspberry. It’s a four-seater and holds plenty of their favorite drink (one part table sugar dissolved in four parts water). Slowly, slowly, my colibríes are returning and thirstily drinking up.

I’ve dubbed this new feeder “El Bar Colibrí,” and I’m delighting in watching them zoom in, in zig-zaggy flight patterns from all directions, knocking each other off the bar stools, drunk on happiness and my colibrí “beer.” They’re skittish about being photographed, so I try to duck behind the patio ledge to take their picture. Thus far, this is the best I’ve been able to capture:

Everybody’s happy now. Even la dueña. But especially me.

22 thoughts on “El Bar Colibri: On the Care and Feeding of Hummingbirds”