Last week I received in the mail two postcards tucked into an envelope that had been opened (presumably by authorities) and sloppily glued shut again. The envelope was postmarked “29.03.18” (last March 29th) in Segou, Mali. My address – the address of a mail service in San Miguel de Allende, Mexico, that picks up American ex-pats’ mail in Laredo, TX, and brings it securely here – was written like a run-on sentence. The envelope itself was bent and battered, as if it had been through a couple of wars.

Inside, on the back of the two Malian postcards, were kind messages in large, loping, handwritten French from an old friend, Makan, in Segou, wishing me a “bonne et heureuse année” (Happy New Year), along with much success, good health, and a long life. He said his family has not forgotten me. No doubt this sweet missive was sent off, like a message in a bottle tossed out to sea, last January. It’s now May. 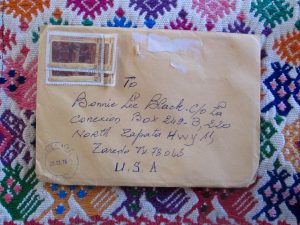 I look at the envelope and ask it, “Where have you been?”

Twenty years ago, when I lived in Segou, Mali, and was completely dependent on snail mail for communicating with far-off loved ones, I became pretty much inured to the postal system there. Once a week I’d bike into centreville — forty minutes in over 110-degree heat — to collect my much-anticipated mail. All along the way I’d have to dodge potholes, sand pits, donkey carts, huge trucks, hordes of sleepwalkers and other bikers. But to me, the risks were worth the rewards.

Often, though, when I got to the post office, I’d find that my mail had been meddled with – steamed open and carelessly re-glued. One day, feeling particularly hot, sweaty, tired, dusty and grouchy, I snapped at the postal clerk as I pointed to a messy re-glue-job, “In my country, mail tampering is against the law.”

She shot me a look that seemed to say, Well, then, go back to your country, and then she shrugged. I stopped complaining.

Makan’s most recent letter reminded me of this. It also reminded me that he and I have known each other for twenty years.

When I first arrived in Segou, in 1998, after my two-year Peace Corps service in Gabon, I stayed in his family’s compound and was showered with hospitality. Makan is a kind, generous and devout Muslim man, the patriarch of a large family. I remember observing him with awe at the time, and subsequently writing about him and his family in my Mali memoir, How to Make an African Quilt (Nighthawk Press, 2013):

“In a room at the far end [of the compound], a skeletally frail, elderly aunt is treated by everyone in the family with immense deference and care. Every morning, after his ablutions and prayers, but before he does anything else, Makan spends time with the old woman, whom he calls ‘La Vielle’ (the old woman) and pays her his respects. ‘We honor our elders,’ he tells me in French on his way back from visiting her room. ‘We must never let them suffer in any way’” (p. 12).

I left Mali to return to the States in 2001, and Makan and I have been corresponding intermittently ever since. He sends me photos of his many children. He shares family news. He reassures me that they have not forgotten me. He wishes me and my family well. In the twenty years I have known him, he has never once asked me for anything. I save all of his letters. I treasure them like relics.

Makan’s eldest son, Tidiani, who was just a boy of about ten when I lived with the family, must be close to thirty now. Today he’s a professional, living and working in Bamako, the capital of Mali.  Since I am one of Tidiani’s 2,419 Facebook friends (!), I messaged him on FB the other day to let him know I received his papa’s letter. In no time at all I received his heartfelt reply: “Bonjour! Je lui dirai!” (Hello! I will tell him!).