Millions upon millions of Americans at or nearing retirement age are seriously hurting financially, through no fault of their own. They may not show it, however, because they’ve become good at “faking normal.”

But look at one of them more closely: She may be long divorced, her grown children busy carving out their lives and careers elsewhere; since the mass layoff at her work several years ago, she’s answered every possible want-ad but has received no responses; her nest egg, such at it was, is close to depleted; she cuts her own hair, shops for “new” clothes at Goodwill, never sees the dentist, thinks she might qualify for food stamps but is too proud to apply, sold her car some time ago and now navigates the city bus system; her rent is months overdue, and she’s terrified of being evicted.

If you were to greet her on the street, she’d seem cheerful and “normal” enough; but if you were to look closer, you’d see in her eyes that faking normal is doing her in.

When author Elizabeth White profiled a woman much like this – a composite of her own experiences and those of many of her baby-boomer-age-friends — in an essay titled “You Know Her” and posted it on PBS’s Facebook page in the winter of 2015, it received eleven thousand “likes” in three days. She had obviously struck a nerve. So she proceeded to write the book she and her friends wished existed: a guide for “regaining control over our lives in this new environment of financial vulnerability.”

That book, Fifty-Five, Unemployed, and Faking Normal, was published late last year and was recently featured in a two-part series on the PBS News Hour hosted by economics correspondent Paul Solman. 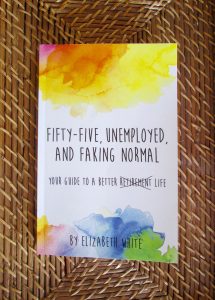 In our blame-the-victim society, it’s easy for people to dismiss those who fall on hard times as having failed in some way: failed to get a good education, failed to work hard enough, failed to climb the ladder high enough… But as White makes clear in her PBS interview, these harsh judgments don’t apply to her and millions of others.

As she told Paul Solman, “I have a bachelor’s from Oberlin. I have a master’s in international studies from Johns Hopkins, and I have a Harvard MBA.” When the World Bank recruited 5,000 people, they took two Americans out of twenty-five. White was one of those two Americans. Most recently, she was the chief operating officer of a nonprofit organization focused on development aid for Africa.

White’s book, though, is hardly written from a place of self-pity or doom and gloom.  Instead, it is a thoughtful, heartful, soulful, thoroughly researched and immensely helpful how-to for anyone acquainted with these very real financial issues or concerned they one day might be.

As she writes, “Every eight seconds, another American turns sixty-five – that’s some ten thousand people per day. By 2030, nearly 20 percent of the population will be sixty-five or older, comprising the largest senior population in the history of the United States. And millions of boomer households are financially unprepared — one extended health crisis, job loss, or traumatic event from insolvency.”

Throughout, White’s writerly voice is calm, down-to-earth, and encouraging, as if she’s sitting right beside you, sharing coffee. She includes other voices as well — short quotes from the many interviews she did along the way – that add to the chorus. She also provides lists of hundreds of helpful websites, such as for government programs (which, we can only hope, won’t get cut by the new administration), nongovernmental organizations offering support, and freelance opportunities. She gives guidelines, too, for forming what she calls “Resilience Circles” — support groups for those going through the same circumstances.

Full disclosure: I am one of five people whom Elizabeth White interviewed in-depth for her book. She wanted to know what made me emigrate to Mexico after retirement (tired of faking normal) and what I thought of my new, ex-pat life here in San Miguel de Allende. Most WOW blog readers know at least parts of my story; but to have it all, please be sure to get White’s excellent book (available from Amazon.com).