Yesterday, January 15th, at countless venues all over the United States as well as internationally, writers expressed their views about the state of American politics for hungry-for-courageous-truth audiences in what was billed as “Writers Resist” readings and events promoted by PEN America.

Here in San Miguel de Allende, Mexico, there was a Writers Resist demonstration in the Jardin (central plaza) at noon, at which I and other local ex-pat writers planned to read. But, given the exuberant, celebratory sounds all around us (church bells chiming, drummers drumming, Aztec dancers dancing and singing), our gathering could only chant in unison: “Puentes, si; muros, no!” (Bridges, yes; walls, no!) to appreciative Mexican observers and hold up placards expressing our views, such as “Outrage Has No Borders” and “Fake President.”

In Taos, New Mexico, though, the piece I’d planned to read in San Miguel was read at the Writers Resist event there by my dear friend Barbara Scott. This morning in an e-mail she shared with me her thoughts:

“Last night, looking around, I had a moment where I thought that this must have been what it was like when the intelligentsia gathered together in Germany after Hitler’s rise to power. They must have thought at one point that they weren’t doomed. That if they kept writing and speaking up, the problem would go away, that they could fight against it, that other Germans would see the truth of who this man was.

“There was something about the quality of the light, the earnestness of the speakers and the quietude of the listeners—the particular moment in time (inauguration week)—that made me feel it was somehow a replay of a terrible history. It was both beautiful and frightening.”

This is what Barb read, my blog post of December 21st, which many WOW readers may already be familiar with:

Many years ago a dear French friend told me a true story about her father. What I can recall from that story is this: During the second world war, in Paris, before my friend was born, her parents were newlyweds in their early twenties. Her father was a policeman. His beat was in the posh 16th Arrondissement.

At some point, he noticed something ominous was happening in the neighborhood he patrolled. Jews were disappearing. He knew that many of the owners and occupants of the apartment buildings on his beat were Jews, so he took it upon himself to warn them privately: Get out – while you can! These people knew him – a nice, earnest, Catholic young man – and they trusted him. They heeded his warning. They and their families fled Paris just in time, thereby escaping capture by the Nazis.

My friend’s father – whom I never knew because he died in a drowning accident before my friend and I met when she and I were in our mid-twenties – never, as far as I know, earned any medals for this act of selflessness and bravery. But to me, he became a hero. I made an enduring statue of him in my mind — a skinny young man in a French policeman’s uniform, on a pedestal, with the inscription beneath: This is what heroism can look like.

Ever since high school, when we all had to read The Diary of Anne Frank in English class, I’ve sought out well-written books about the darker periods in recent history and asked myself as I read, How would I have behaved if I had lived then? What would I have done?

For example, would I have been an abolitionist, like Sarah Grimké of Charleston, South Carolina, the courageous protagonist of Sue Monk Kidd’s brilliant historical novel, The Invention of Wings? Or would I have been like most of the other comfortable plantation owners and their families, rationalizing the evils of slavery away by claiming it was “good for the economy” and therefore the young nation? Imagine having to PAY all those plantation workers! a slavery apologist might say.

Or if I had lived in Nazi Germany: Would I have been a “good,” churchgoing German villager, keeping my head down, going about my day-to-day activities and chores without asking any questions, believing that my duty was to obey the laws and be loyal to and respectful of those in authority? (Heil Hitler!) Or would I have been like Trudi Montag, the protagonist of Ursula Hegi’s life-altering novel Stones in the River, and bravely broken laws by hiding Jews in that village and saving their lives?

I like to think of myself as brave – more concerned about my soul than my skin.

Which brings me to today, the day that happens to be the darkest day of the year, the winter solstice, in which the future, I’m afraid, also looks quite dark. The man who will be the next president of the once-accurately labeled “United” States represents an ominous figure. He is, by all accounts, unstable, unqualified, and unprepared to be the leader of the free world. On Inauguration Day he’ll vow to uphold the Constitution – a document he’s likely never even read. He prides himself on not needing to read because he’s “smart enough.”

Those who believe him and trust him to do good by them have never, I suspect, had the great misfortune of crossing paths with the likes of a sociopath. Good people with good intentions and positive outlooks, who think, Give him a chance! All will be well! could not possibly wrap their minds around his way of thinking and his apparently unquenchable desire for more wealth, more power, and more adoration – at everyone else’s expense.

Well, then, what can we do? How can we find our way through the darkness that appears to be lying ahead? It seems to me that some of the answers might be: Turn on the lights and keep them on. Stay awake, aware, alert. Keep our heads up and our eyes open. Read reliable news accounts. Show up, stand up, speak up. Write and share truths. Hold fast to dignity and decency, which seem to be, along with democracy, endangered. Resist complacency. Be brave. Go high. Be the light.

Later in the afternoon, as I was walking home from my Hats & Scarves meeting, passing through the Jardin again, I came across a group of entertainers dancing to lively Mexican music in the street. One was in a spaceman costume, another a clown, another Che, another an old king, another Donald Trump…. The onlookers laughed. The soon-to-be-inaugurated 45th president of the United States is seen here as little more than an object of derision. As he himself might tweet: “Sad.” 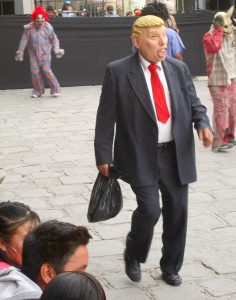