The moment I read this quote – “I am too old to mince words” – in the New York Times’ recent book review of Marilynne Robinson’s new essay collection, What Are We Doing Here? (Farrar, Straus and Giroux), I knew I had to get and read the book right away, then write a review of it for my WOW readers, who would, like me, likely echo that same sentiment. I thought we could relate.

In these essays, most of which were first given as lectures in leading universities and seminaries in the U.S., Canada, and Britain over the past few years, the American novelist and essayist Robinson, now 75, reflects on the central preoccupations of her religious and intellectual life. She deals with what she calls the Great Questions, in chapters headed, for example: Grace and Beauty; Mind, Conscience, Soul; Faith, Hope, and Love; and Integrity. Reading them I felt transported, as if I were a young student again at Columbia University, enriched, uplifted and dazzled by the brilliant mind of the professor at the lectern.

It seemed to me too as I read, that this book would be ideal for older women’s book discussion groups to embrace, one chapter at a time – because this is the time in our lives when we have the blessing of time to devote to such luxuries. No longer in the work force or raising families, we can turn our full attention to what Robinson refers to as “our magnificent minds.” Like all good lecturers and essayists, she doesn’t pretend to have The Answers; instead, she stirs our thinking and shakes our commonly held assumptions. 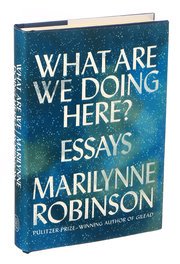 A memorable quote: “The willingness to indulge in ideological thinking – that is, in thinking that by definition is not one’s own, which is blind to experience and to the contradictions that arise when broader fields of knowledge are consulted – is a capitulation no one should ever make. It is a betrayal of our magnificent minds.”

During her fiction as well as nonfiction writing career, which began with her novel Housekeeping (1980), Robinson has received numerous awards, including the Pulitzer Prize for Fiction for her second novel, Gilead (2004). Her four novels are noted for their thematic depiction of both rural life and faith. The subjects of her five essay collections have spanned numerous topics, from the relationship between religion and science, to contemporary American politics.

This new essay collection is, as the Times reviewer labels it, Robinson’s “intellectual autobiography” – an account of “what it means to be the custodian of one’s conscience in a world saturated with orthodoxies.”

I highlighted dozens of beautiful passages in the book, which I intend to return to often for spiritual and intellectual uplift. Among them, this one, which comes at the end of her chapter, “Considering the Theological Virtues,” is my favorite:

“For what should we honor and love ourselves and one another? For heart, soul, mind and strength, for the astonishing richness of human being that enables us to enjoy our gifts and to shape them and explore them and to make more of them than we would ever have thought possible. God wants this from us and from our neighbors, whom we love when we give them courage, grant them sacredness, sustain them in thinking, inquiring, and imagining, and assure that they have the needs of the body, which frees these powers in them beloved by God.”

12 thoughts on “Too Old to Mince Words”