Just mention the word “puppets” and my ears prick up like a Doberman’s at the sound of the invitation, “Walk?”

You could say I’m a little crazy about puppets, and I always have been – watching them in action, creating them with my own two hands, using my creations to teach little children in an effort to dazzle them into learning.

So when I saw that there would be a free puppet show in the central courtyard of the Biblioteca here in San Miguel de Allende on Tuesday of this week for, I assumed, children of all ages, I knew I had to be there. I try never to let a puppet opportunity pass me by.

This show was put on by the company Tradiciones Mexicanas Corazón de Niño (Mexican Traditions Company Heart of Child), based in Mexico City, which has been creating music and stage shows that promote Mexican traditions through the arts for the past fourteen years. This was their first time performing in San Miguel.

On this occasion, the theme was “Dónde está la Navidad?” (“Where is Christmas?”), and the star puppets were a little boy named Tino and his beloved abuelo (grandpa) named Don Porfirio. To the accompaniment of a piano player, the two bantered and sang in harmony, sometimes making the children in the audience laugh (like the time Tino had to excuse himself to run to el baño) and sometimes inviting the kids to clap along.

I can’t say I could follow the fast Spanish; nevertheless, I could intuit the show’s message. Plus, I’d read the press material – that this theater presentation would “lead us to know the meaning of Christmas, reinforce our values and family relationships, and evoke Mexican traditions, while discovering together the message that Christmas has in store for us.”

So, just like one of the many children in the audience, I was enthralled. For me, in answer to the question, “Where is Christmas?”, I’d say Christmas was there, in the courtyard of the Biblioteca, shining on the faces of the happy, attentive, Mexican children.

Here are some of my photos from this delightful event: 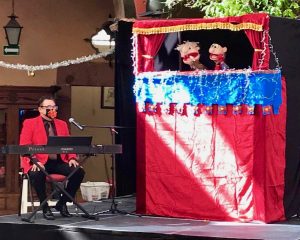 Wishing all of my WOW readers a very Merry Christmas and a Healthy, Happy New Year.