On the way to visit her then-boyfriend in prison for draft evasion during the Vietnam era, the young Patricia Hampl watched in awe as a dumpy, frowzy old woman on the bus platform passionately embraced and kissed a handsome, fair-haired, much-younger man. It was a good-bye kiss, Hampl learned after the old woman boarded the bus and plopped herself in the seat beside her. And, perhaps in response to Hampl’s dumbstruck, quizzical expression, she learned too that the young man, who was now running alongside the bus blowing kisses at their window, was the woman’s husband.

“Oh, I could tell you stories,” the old woman sighed, before falling fast asleep for the remainder of their bus ride.

So begins one of the most anthologized personal essays in the modern canon, which is also the opening chapter in Hampl’s widely-read-by-students-of-the-genre essay collection, conveniently titled I Could Tell You Stories: Sojourns in the Land of Memory (W.W. Norton).

I think of Hampl’s haunting essay every time I board a bus, especially here in San Miguel de Allende, where I ride buses frequently. Public transport is blissfully affordable and readily available in this charming Mexican mountain town. Every day I walk as far as my legs will carry me, then, after several miles of on-foot exploration, I sometimes hop on a bus to take me back home. Only 5 pesos (or about 25 cents U.S.) from anywhere on the bus route! This is just a fraction of the cost of a taxi ride anywhere in San Miguel – roughly 40 pesos, or $2.22 U.S. (not including tip), which is the way most gringos choose to get around.

Oh, but what they’re missing.

To me, each bus I take is like a small, moving village, in which I’m an honored guest. I observe the people around me and try to imagine their stories:

The young woman beside me on my left is anxiously primping in a hand-held mirror. She reapplies some bright red lipstick and smooths her jet-black hair. She’s on her way to a rendezvous, I surmise, with a young man she’s in love with. But she knows the competition is keen. Nine-tenths of the women here her age (early 20s) are beauty-queen material, but she is plainly not. Will he find me beautiful? she appears to ask the mirror. I can only hope so, for her sake.

To my right is a small, nut-brown man with white stubble on his wizened face, wearing a straw cowboy hat, a faded flannel shirt and worn-out jeans. I imagine he’s the father of many children – ten of them, I’m guessing – and he’s on his way home. It’s been a long day for him. It’s been a long life, in fact. His exhausted face is expressionless now, but I imagine he will brighten when he sees his family, when he smells his wife’s good cooking, when his young grandchildren rush up to him and grip his legs, shouting, “Hola, abuelo!” and he sits down to dinner.

Two young men with guitars hop on the bus, and the driver turns off his own CD to accommodate them. The young men, like medieval minstrels, stroll the length of the bus, playing their guitars and singing Mexican love ballads (“mi corazón … su corazón…”), not too badly. When they collect the passengers’ thank-you offerings and hop off the bus several stops later, the driver turns his raucous CD back on, and the moving village resumes its restrained fiesta. The young musicians, I trust, are saving these meager earnings to help fulfill their musical-career yearnings. 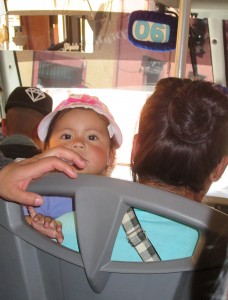 A darling baby (well, all of the babies here are darling, in my view) held by her mom or grandmom (it’s hard to tell sometimes) in a seat in front of me is wide-eyed, taking it all in. What will her story be? I wonder. What will her life be like?

Certainly her life – like everyone else’s here and everywhere else – will contain struggles and suffering. This, I believe, is one of the great benefits of getting older: You gain perspective. You come to learn, finally, that everyone – everyone — has a story, and every one of those stories includes struggles and suffering. Suffering is universal. Realizing this teaches empathy and compassion. Instead of thinking in terms of boats (as in, “We’re all in the same –”), I choose to think that we’re all on the same life bus.

A passage from a book I’m now reading illustrates this point for me:

Soon after her mother dies and the man she’s in love with marries her best friend, Alma Whittaker, the privileged young protagonist of Elizabeth Gilbert’s excellent new historical novel, The Signature of All Things, gets a lecture from her wise, old housekeeper, Hanneke de Groot:

“… It’s a pity we cannot put an old head on young shoulders, or you could be wise, too,” Hanneke tells her. “But someday you will understand that nobody passes through this world without suffering – no matter what you may think of them and their supposed good fortune.”

“What are we to do, then, with our suffering?” Alma asked. …

“Well, child, you may do whatever you like with your suffering,” Hanneke said mildly. “It belongs to you. But I shall tell you what I do with mine. I grasp it by the small hairs, I cast it to the ground, and I grind it under the heel of my boot. I suggest you learn to do the same.”

Good advice, I think. But I would just like to add this suggestion: Then throw it under the bus.