Last week, taking a break from Fire & Blood, the brilliant but oh-so-bloody history of Mexico by T. R. Fehrenbach that I’ve been reading in short but steady spurts every night now for weeks, I reread a delightful memoir in my eBook library, Life Without a Recipe, by Diana Abu-Jaber. Sometimes it’s necessary, I’m finding, to step away from the overwhelming, historical truths of man’s inhumanity to man (so much war, so much cruelty) and read about one, other, contemporary woman’s life, especially when that woman writes so well and from the heart. 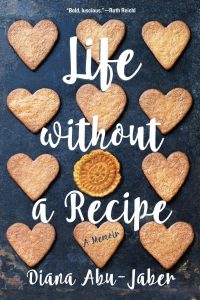 Ruth Reichl, American food writer and former editor in chief of Gourmet, called Diana Abu-Jaber’s newest memoir, Life Without a Recipe,“bold” and “luscious” – “indispensable to anyone trying to forge their own truer path.” Or as I would put it: anyone seeking their own, personalized life recipe.

I’d come to know award-winning author Diana Abu-Jaber through her first memoir, The Language of Baklava(2005), when I included it in a graduate school research paper I was doing on memoirs-with-recipes. That charming book, filled with love and laugh-out-loud passages, told of her early years growing up in New York State with her larger-than-life Jordanian father, Bud, and his passion for food and cooking.

In this memoir, Life Without a Recipe, in sparkling prose, Diana takes her readers further, focusing on the two greatest influences in her life – her tough, Catholic, German maternal grandmother, Grace, and her flamboyant Muslim father, Bud – and how she as a young woman was caught between their contradictions. She refers to this in food terms (of course) as “the ancient war between dinner and dessert.”

Her grandmother Grace, she writes, “was the fountainhead, the wellspring of sweetness in the world. She’d lived through the Great Depression, raised a daughter on her own, worked without respite for years. She knew the importance of a little sugar in life.” [So] “she brought forth armloads of candy” for her three granddaughters.

Diana’s father, Bud, on the other hand, “was suspicious of sugar and loved to claim he never ate ‘white food.’ The pleasure of the palate, for him was all salty, bready, meaty, cucumbers and yogurt and olives.”

Ultimately, Diana ignores their well intentioned “recipes” for the way she should live her life and she comes up with her own. As she discovers, however, finding one’s own path sometimes takes a mistaken marriage or two (or three). And it takes a great deal of angst (was it possible to have a serious writing career AND be a mother?) and, even when she knew what she wanted (of all things, in one’s mid-forties — a baby!), the nerve to pursue it.

Finally, and happily, Diana and her third husband Scott adopt a beautiful brown baby girl, name her Grace, and shower her with all the bottomless love and joy they have.

Despite the real tears I shed when I read of “our” beloved Bud’s death at the age of seventy-five (oh, to have had a father like him!), this is an uplifting and heart-warming memoir, which for me held deeper meanings and made me ask some crucial questions, the main one being: Whose recipe are we to follow in our lives?

When I was young, that recipe’s step-by-step procedure as laid out for young people went something like this: grammar school … high school … college … marriage … child rearing … home ownership … career … retirement … death.  Anyone who deviated from this prescribed path was considered a social pariah.

Attitudes have since changed, of course, many for the better. But still it takes courage, I believe, to analyze one’s own unique ingredients and come up with our own individual recipe for a full and rich life – the life we were meant to live.

On a practical note: The other day I baked an apple galette for my friend Nancy who was coming here for tea. This French farm-style apple tart emerged from the oven a pretty little thing: 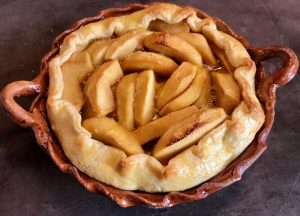 But I realized (too late) that I’d been too heavy-handed with the fresh lemon juice and too stingy with the sugar when I tossed the apple slices in. This tart wasn’t sweet enough! A sweet tart must be sweet– it’s a dessert, after all.

So my note to self: Don’t be in a rush, and don’t cut corners. Above all, pay closer attention to your own recipe.

Here is that recipe, from pages 12-13 of my new book, Sweet Tarts for My Sweethearts:

And on another note: I recently recorded an essay I’d written for the wonderful website Eat, Darling, Eat, titled “Cooking Under Pressure.” It’s only five minutes long. You can listen to it here: https://www.eatdarlingeat.net/2017 .