This is not the first post I’ve written about puppets. Nor will it be (I hope) the last. You could say I’m a little obsessed with puppets. (Or, a lot.)  They hold a special place in my heart – the place in me where the child still is, the child inside who still needs to play.

The other day, Suzanne Bacon, a friend from school days in New Jersey, who shares her time between Boston and here in San Miguel de Allende, Mexico, and I got together for a “play date” at my place – to make sock puppets.

Suzanne, like me, works as a volunteer at a local grammar school. After learning about my use of homemade puppets to teach English to the little niños at the charming after-school program, Aprendizaje del Ingles, where I volunteer on Wednesday afternoons, Suzanne wanted to add puppets to her teaching repertoire too.

We had a yummy lunch of quiche and salad (which Suzanne generously brought), and then we spread out on my bed all the puppet-making materials we could gather together: 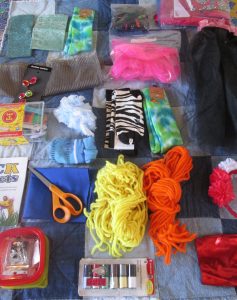 Then we set to work – choosing to make fish-like sock puppet creatures of our own childlike designs: Suzanne named hers Gil; I named mine Phil:

The primary purpose of these puppets, Suzanne and I agreed, was to capture our oftentimes rambunctious little students’ attention and to teach them the essential lesson, which, we could only hope, would last a lifetime, that learning can be playful. It can be FUN.

Just this past Wednesday, I told Suzanne, I’d taken my first Mexican hand puppet, Dolores Danza, to Aprendizaje again, and she performed her usual magic of captivating the kids. I tried to hide behind Dolores’s skirt as I held her up to dance (to the tune of the Mexican hat dance) and sing absurd made-up songs in English based on each child’s name.

Their surprised faces – and their belly-laughter at the nuttiness of it all – were priceless. (For more about Dolores, see my previous posts, “Puppet Power,” July 7, 2016, and “Puppet Partners,” October 22, 2016.)

In my own case, I think I’ve been in love with puppets all my life — ever since I’d been entranced by the ’50s kids’ show “Kukla, Fran, and Ollie” on TV. I loved my own first puppet, a Peter Pan marionette, because it was I who had the power to make him fly.

And I especially loved the five hand puppets I’d created when I was in the Peace Corps in Gabon for giving health presentations, in skits and songs, for the elementary school children at my post in Lastoursville in the middle of the rainforest – where few, if any, of the children had ever even seen a hand puppet in their little lives.

When I learned, near the end of my Peace Corps service, that puppets are widely used in Mali, West Africa, I knew I had to go there. As I wrote in my memoir about my subsequent experience living and teaching in Mali, How to Make an African Quilt: The Story of the Patchwork Project of Ségou, Mali (Nighthawk Press, 2013):

“Mali’s use of puppetry actually dates back many hundreds of years. Ibraim Battuta, an Arab visitor to the court of Mansa Souleymane, then king of the Mali Empire, which at that time encompassed most of what we know today as West Africa, is believed to be the first to document, in 1355, Malians’ art of using masks and marionettes [puppets] in their performances. To this day, intricately handmade puppets of all shapes and sizes draw locals as well as some adventuresome tourists to annual festivals in the Ségou region.”

In Mali, the puppets used in daytime performances usually take animal shapes and are larger than life – like the Muppets’ Big Bird. But the night puppets are generally smaller, human-like figures, with broken mirrors for eyes – to reflect the outdoor fire light, create a mysterious atmosphere, and mesmerize the audience, especially the children. In addition to singing and dancing, the nighttime puppets talk a lot. Their main job is to teach the awe-struck children life’s most important truths.

This week I read an obituary in the New York Times for the textile artist Ethel Stein who died last week at the age of 100. I’d never heard of her before, but I was captivated by her connection to puppets:

“… A more lighthearted part of her legacy came from a side business that grew out of her penchant for repurposing things that others might have discarded. She turned old socks into puppets, first for her son’s nursery school, then for a growing body of fans. …

“One wound up in, or on, the hands of a young puppeteer named Shari Lewis, who by 1953 was making a name for herself in children’s television in the New York market. Ms. Stein designed several puppets for Ms. Lewis, who would later in the 1950s achieve national fame with Lamb Chop, Charlie Horse and the rest of her puppet pals. …”

It’s easy – and inexpensive, too — to make sock puppets, like Suzanne and I did this week, out of repurposed materials, to dazzle the niños in your life (as well as your own inner child). But if you want to splurge, you could order a vintage sewing pattern for the famous, adorable ’50s TV puppet Lamb Chop. I looked it up: Simplicity Pattern #7989 or Butterick Pattern #3719. Maybe that’ll be next….