There was a time, in New York, when I sometimes ate fresh raspberries for supper. That was all I wanted, all I yearned for. A half pint of fresh raspberries was costly, having been flown into the City from somewhere far away where they happened to be in season, so this was a luxury for me, as a single, self-supporting woman living alone on a tight budget in a studio apartment on the Upper West Side. But I felt it was worth the expense. Eating an entire container of fat, fresh, red raspberries for supper made me happy.

While the pre-sunset-light streamed into my little apartment, I’d sit cross-legged on top of my desk, which abutted a west-facing window that overlooked  Riverside Park. Then I’d pick up each berry slowly, one by one, and study it in the golden light, as if it were a jewel — its ruby color and rounded facets, its softness and fragility, its feather-lightness in my fingers.

Then I’d place it on my tongue like a sacrament, crush it against the roof of my mouth, close my eyes, and taste. This occasional, quasi-religious ritual took as long as it might take to eat a three-course dinner at a nice New York restaurant. But I was in no hurry. I was eating happiness.

For the twenty years I lived in that studio apartment in Manhattan, I often fantasized about one day owning a small piece of land in the countryside somewhere, where I’d have raspberry bushes of my own and, ultimately, gorge on the free fruit, when in season, at will. That day eventually came – well, part of it, anyway. I wrote about that experience, planting raspberry bushes outside of my cabin in northern New Mexico, in my forthcoming book, Sweet Tarts for My Sweethearts: Stories and Recipes from a Culinary Career (Nighthawk Press, October 2020).

The recipe that accompanies that true story in Sweet Tarts is my tart adaptation of my Taos friend Melissa Bell’s recipe for raspberry-rhubarb pie. I haven’t been able to make that recipe here in Mexico because I can’t seem to find fresh or frozen rhubarb anywhere, alas.

So, for a tea-and-tart get-together I had with a friend here in San Miguel de Allende this week, I created my own raspberry tart recipe, the inspiration for which came to me during a stretch of sleeplessness one recent night:

I rolled sweet pastry dough into a large round, patted it into one of my 10” pizza pans (see previous WOW post re “pizza” tarts – www.bonnieleeblack.com/blog/apple-time/ ), slathered the bottom with good-quality raspberry jam, spread on top of that some frozen raspberries that I’d thawed and drained well, and baked this “raspberry pizza” in a preheated 400-degree (F.) oven for about 20-25 minutes, until the edges were golden and the fruit bubbly.

Then, while it was cooling on a rack, I carefully placed a half pint’s worth of fresh, fat, red raspberries over the top, then sprinkled it all with confectioners’ sugar.

Just making this tart made me happy. All the dispiriting world news floated from my mind. The presidential debate/debacle/disgrace vanished from my consciousness. I’d made a thing of beauty! And not just for my own enjoyment. I shared it with friends and neighbors, whose feedback (“luscious!” “intense!!!” “THE BEST!”) fed my soul.

The guys downstairs have even taken to calling me “Queen of Tarts.” Whenever I present them with samples of my just-baked, still-warm creations, one of them genuflects in front of me and exclaims reverently, “Your Majesty!” So funny.

Here is my slice of it, which is gone now. I can tell you it tasted like happiness: 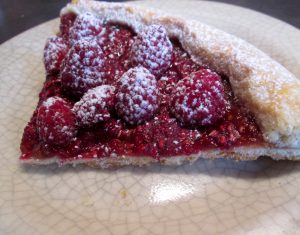 I’m reminded of a sonnet by one of my favorite poets, Edna St. Vincent Millay, that ends with, “If I would help the weak, I must be fed/ In wit and purpose, pour away despair/ And rinse the cup, eat happiness like bread.”

Except for me, at least occasionally, instead of bread, it’s raspberries. To me, happiness, like raspberries in season, is precious, rare, and fleeting. But it’s so worth seeking out — and savoring slowly. Especially in these challenging times.

Note: In case you missed it, here’s another WOW post on the joys of tart baking in tough times: www.bonnieleeblack.com/blog/when-the-going-gets-tough/ .