In the fall of 1981, when my first book, Somewhere Child, about the abduction of my baby daughter by her father, was published by Viking Press in New York, a conservative rabbi in Massachusetts named Harold S. Kushner, driven by the death of his fourteen-year-old son Aaron from the rare genetic disease progeria, published the revolutionary inspirational guide, When Bad Things Happen to Good People, which became a bestseller.

I say “revolutionary” because Kushner’s book held the power to cause a dramatic shift in people’s thinking. Millions of people, in fact; it’s sold over four million copies. The idea that bad things could happen to good people was, especially in those days, antithetical to large swaths of “good” people who believed down deep that bad things were meted out as punishments by God to “bad” people for their bad deeds: People got what they deserved in life.

Growing up in a nice little town in northern New Jersey, and living most of my life in the United States, I came to know many good people from good families who went to good schools and lived in good homes and drove good cars and had good jobs and ate at good restaurants and wore good clothes and enjoyed good health and liked to gloat, “Life is good,” who credited their good fortune to their own good decisions. The less fortunate, in their view, as far as I could tell, were to be at best pitied, at worst blamed, for their misfortune or their bad judgment.

Having lived nearly nine years in Africa, I can say this is not the prevailing attitude there, and because of this I felt more at home in Africa than I’ve ever felt in the States.  Africans – especially the vast majority of Africans on the ground, where I lived – know hardship and misfortune well. For them, life is good some days and clearly not so good others. No one is to blame for this; it’s just the way life is. I never heard an African cry, “Woe is me!” or “Why me?” because, I think, the universal understanding was – and likely still is: Life is difficult for everyone at times. We all must roll with it.

Similarly, I’ve observed in my seven years here in Mexico that Mexican people are realistic about the ups and downs of life as well. The Mexicans I’ve come to know are among the most tolerant, resilient, and nonjudgmental people I’ve ever met.

Recently I’ve been reminded that in the twelve years that my daughter was missing, when I was in my twenties and thirties, I had a few nice, long-term boyfriends from good families who wanted to marry me. But when each of their mothers, in slow succession, learned my story – that my ex-husband had absconded with my daughter — they put an end to their beloved son’s plans. If something so bad had happened to me, they reasoned, clearly I must be a bad person underneath the pretty face, not worthy of joining their good family and tarnishing their good name. They forbade their son from marrying me.

Ultimately – or should I say consequently — I chose to stay happily single. The state of wedded bliss, if such a state exists, is now as foreign to me as Africa is to most gringos. 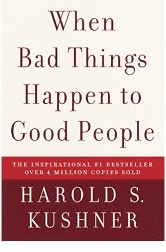 This week, in the midst of the turmoil of packing to move again within San Miguel due to unforeseen, unfortunate circumstances, and not knowing quite where to go next, I’ve been reading rabbi Kushner’s first book — he’s since written more than a dozen — When Bad Things Happen to Good People and deriving comfort from it. He writes in an early chapter:

“The idea that God gives people what they deserve, that our misdeeds cause our misfortune, is a neat and attractive solution to the problem of evil at several levels, but it has a number of serious limitations.

“As we have seen, it teaches people to blame themselves. It creates guilt even where there is no basis for guilt. It makes people hate God, even as it makes them hate themselves. And most disturbing of all, it does not even fit the facts.”

In times of tumult, like now, when it’s tempting (but pointless) to moan, Why am I going through this AGAIN? and When will this roller coaster ride END?, I’m finding that loving, compassionate friends – and this wise rabbi’s soothing book – have become my salvation. I’m feeling deeply grateful. And even, surprisingly, hopeful.