Zorba the Zebra, my newest handmade puppet, taught a class recently to the little niños at Aprendizaje del Ingles here in San Miguel De Allende about some of the words in English that begin with the letter “z.”

We covered: zenith, zero, zigzag, zipper, zoom, and zucchini. On their worksheets the kids drew a picture representing each word – to the best of their ability – then colored in their pictures as they wished.

My personal favorite of these six z-words is zigzag, which happens to be the same word in both English and Spanish. This is unusual in my experience because Spanish doesn’t seem to bend to English much. Even the French, who’ve got to be among the most linguistically chauvinistic folks in the world (understandably, I feel), have buckled a bit. Take the English word “weekend,” for instance. In French it’s also “weekend.” Here in Mexico, it’s “el fin de semana,” (the end of the week).

The word zigzag itself, I just learned, originates from the German word “Zickzack,” meaning “symbolic of alternation of direction.” Today “zigzag” means “a line or course having abrupt alternate right and left turns” or “veering to right and left alternately.”

I think I feel a personal affinity for the word zigzag because it represents the path of my life – two steps forward, one-and-a-half steps back, then side to side, a little like a jaggedy dance (cha-cha?). Lots of other people appear to climb their ladders of success or their respective learning curves pretty much straight up. But I? Not so.

This has always been the case for me, so I should be used to my zigzaggy journey by now. But I’m not. I still sometimes get discouraged.

Take my efforts at Spanish language acquisition, por ejemplo (for example). When friends ask me how I’m progressing, my answer is always “glacially.” My long-suffering Spanish teacher, Edith, rolls her eyes and mutters “por favor, Bonnie!” She tells me to practice more. I counter with, “Where?” She tells me this town is filled with people who speak Spanish. I respond, “But not with me. They speak English with me.” She and I go round and round.

During our last lesson I announced, like the stubborn five-year-old I guess I still am somewhere inside, “No me gusta verbos (I don’t like verbs). Could we do something else today?” This announcement surprised even me because I used to tell my English 101 students at UNM-Taos: “The verb is the most important word in any sentence. Verbs give muscle, movement, life to your writing.”

Edith knows how to handle me. “You’ve got to learn verbs,” she said firmly.

Similarly, my efforts to improve at sketching are definitely zagging. Every sketch I do looks like it was done by the stubborn five-year-old with her hands on her hips who refuses to learn Spanish verbs. (Some of the little niños in my class at Aprendizaje draw better than I.) Last Tuesday, when I joined the Urban Sketchers group at the El Chorro Cultural Center, I climbed to the top level and took a stab at sketching/painting the vista:

Which just doesn’t do the view justice.

So, for the past few days I’ve been discouraged.

I knew I needed to get a grip, give myself a talking-to (as I frequently have to do), remind myself that my life has been filled with zigzags. It’s been one long jaggedy dance.

The steps up to the El Chorro Cultural Center, high on a hill near el centro, follow a zigzag pattern. They’ve given me a concrete metaphor (for any endeavor) to help snap me out of my slump: Climb a little, rest a little on one of the several grand terrazas, find the next set of stares, climb some more, and repeat the process until, breathless, you’re at the top and can see the whole view. If you choose to sketch the vista, it doesn’t have to be perfect. It’s just a memory. It’s just proof that you tried. 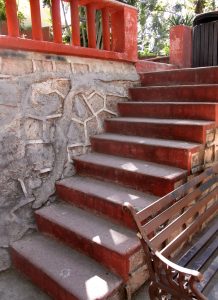 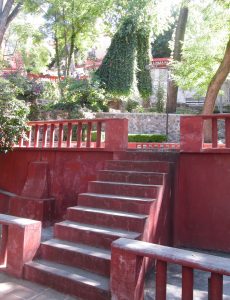