Walking back home after an Urban Sketchers gathering at the San Antonio church here in San Miguel de Allende, Mexico, this past Wednesday, I came across a dazzling new sight in this city of endless dazzling sights: colorfully tasseled bread baskets seemingly floating in the sky over Relox Street in midtown. Of course I had to stop and take their picture: 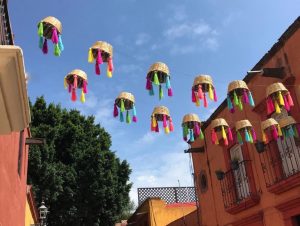 After having just spent an hour sketching — trying to tell myself, and train myself, to pay close attention to the subject at hand and really, really see it — I stood beneath these baskets for a long while and wondered, What was I looking at? and Why was it up there? Did it have some sort of religious meaning? What was it celebrating?

Finally, I asked the young Mexican woman in a nearby gallery, “Que significa las canastas sobre la calle?” (What do the baskets over the street signify?), and she informed me, with a slight shrug, “Oh, they’re just for decoration.”

It was an exceptionally beautiful day. Everyone I spoke with remarked on it, which was unusual, it seemed to me, because beautiful days normally go without saying here. The rainy season was winding down. The reservoir at the Botanical Gardens, which was bone-dry just about six months ago, was now full; and all looked lush and green to me on a recent hike there: 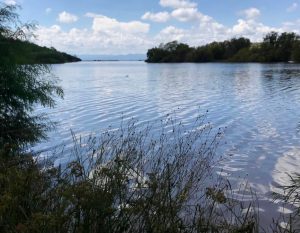 But Wednesday night we got a surprise of biblical proportions. Not long after dark, storm clouds rolled in like an angry invading army, lightning struck in a fiery fusillade, thunder shook the earth and sky, and rain came down with a vengeance for hours.

The wind repeatedly opened then slammed shut my outer screen doors. The rain seeped through the closed windows of my second-floor apartment, creating enlarging puddles on my terracotta tile floors. My evening was spent mopping. By eleven, though, Mother Nature seemed to have had her say. Her wrath had subsided. I went to sleep.

But in the morning on my walk I inspected the damage in the surrounding area. I visited my dentist in a nearby neighborhood and saw that his entire office had been flooded. I saw that a long, tall, cement retaining wall had been knocked over like a child’s toy. I saw people bailing out their ground-floor homes and tiendas (shops).  I stepped through a lot of squishy mud.

I live near an arroyo, which is normally a long, winding, boulder-filled gully, not terribly deep or wide, with scant water flowing through it most of the year. But recent rains, especially Wednesday night’s thunderstorm, have strained this arroyo, almost to its limit: 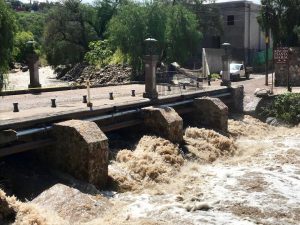 At an altitude of 1,900 meters (6,233 feet), snuggly situated in the central mountains of Mexico, I had thought (wrongly) that the serious flooding caused by the climate change crisis that I’ve read about in the news of elsewhere in the world, was not one of the many things I personally needed to worry about. We’re a long way from sea level here. Little San Miguel de Allende is not to be confused with New York City or New Orleans.

But my Spanish maestra (teacher), Edith, who was born and raised in this neighborhood and who teaches me so much more than Spanish, explained in a recent lesson that there are large bodies of water (lakes and reservoirs, I presumed) higher up in the mountains, which can and do overflow their banks and barriers when there is too much rain. That is, too much rain caused by climate change. Those burst bodies of water could cause this arroyo to overflow and flood this area, Edith told me.

So even here in seemingly idyllic San Miguel, Mother Nature is roaring: Wake up! Listen to me! Pay attention! Open your eyes and SEE! No one is exempt…

On Thursday’s walk I had to return to Relox. I had to see whether the violent storm had torn the hanging baskets from their spidery-fine threads and smashed them to the ground.

Is all hope lost? I wondered.

No, I was relieved to see, it isn’t, quite yet.