(This week’s WOW is adapted and updated from a Christmas WOW post of a few years ago. I hope you’ll agree it’s worth reposting.)

In Shakespeare’s play “As You Like It,” Duke Senior, living in exile deep in the Forest of Ardenne, optimistically announces to his men that he “finds tongues in trees, books in the running brooks, sermons in stones, and good in everything” (Act II, scene 1).

I’ve always found this scene to be particularly inspiring. So I tend to search for sermons in unorthodox places – not just in a church on a Sunday morning.

On my frequent walks in Parque Juarez, here in San Miguel de Allende, for example, I ask the 100-year-old palm trees — their long arms reaching down to the walking/jogging path — what they can teach me. Be supple, I like to think they’re responding. Bend. Sway.

And the stones? This old, colonial city in the central mountains of Mexico is made of stone – cobblestone streets, stone slab sidewalks, stone walls, stone archways and churches, stone homes. (They say this city will never go up in flames because stones don’t burn.) What do all these stones preach to me? Withstand, they say. Weather the storms. Be strong. Endure.

Lately, then, I’ve been inquiring of the decorative Christmastime piñatas hanging everywhere in el centro and being offered for sale in the mercado: What is your story, and what can I learn from it?, I silently ask them.

I did a little research and found that the piñata’s history dates back to Marco Polo, who is credited with discovering what we now call piñatas in Asia. He observed that the Chinese fashioned figures of animals, covered with colored paper and other adornments, to greet the New Year. When participants knocked the figure hard with sticks, seeds spilled out.

In the 14th century the custom then passed into Europe, where the first Sunday in Lent became “Piñata Sunday.” (The Italian word pignatta means “fragile pot.”) In Spain a clay container was decorated with ribbons, tinsel and fringed paper and used in a fiesta called “The Dance of the Piñata.”

Spanish missionaries to Mexico tried to introduce the piñata in an effort to attract converts to their ceremonies – only to find that the indigenous people already had similar traditions.

To celebrate the birthday of their god of war, Huitzilopochtli, Aztec priests placed a clay pot on a pole in the temple at the year’s end. Colorful feathers adorned the richly decorated pot, filled with tiny treasures. When it was broken with a stick or club, those treasures fell to the ground. Mayans also played a similar game in which the players’ eyes were covered while hitting a clay pot suspended by string.

The Spanish missionaries transformed these games for religious instruction, and these beliefs have continued in large part to today. Seven-pointed piñatas symbolize the seven deadly sins (envy, sloth, gluttony, greed, lust, wrath, and pride). The stick used to break the piñata symbolizes love. And the candies and treats that pour from the broken piñata symbolize the forgiveness of sins and a new beginning.

The sermon I’m hearing in my heart now from these festive Mexican holiday piñatas goes something like this: Keep reaching up. Keep striving. Keep thwacking in blind faith. There may well be blessings and surprises – “tiny treasures” — in store in the coming year. 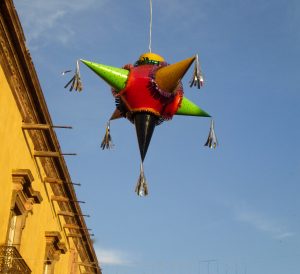