Madeleine Herrmann’s spacious adobe home in Taos is filled with beauty and flooded by early autumn daylight. She sits on one of the plush white sofas in her beautiful living room and talks, happily, about her life.

At 84, she has stories to tell, and they’re all riveting. And, fortunately for us, she has taken the time in recent years to thoughtfully, painstakingly write her stories down. Her two published novels, Partita: A Psychological Mystery and Isabelle’s Dream (both published by Plain View Press of Austin, TX) closely follow her own and her family’s histories. 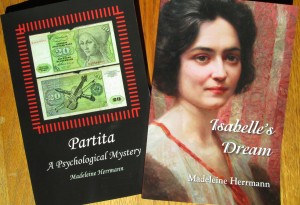 Madeleine was born in Lyon, France, in 1930. She and her family survived World War II in Nantes, which was bombed repeatedly and partly destroyed. As she describes that time in Partita, her family spent many nights in a cold bomb shelter, yet she never felt fear, never believed that they would die or even be hit. “The children had brought blankets, pillows, and homework, while the adults had brought wine and cards,” she writes. One imagines a party atmosphere.

Speaking of that long-ago time today, Madeleine credits her early stoicism to her mother’s belief in “La Méthode Coué,” a positive-thinking strategy developed by Dr. Émile Coué at the beginning of the 20th century, involving optimistic autosuggestion. Her mother had used this method both as a preventive and curative technique. “In the bomb shelter my mother told us firmly, ‘No need to worry. We will be safe, safe, safe!’” Madeleine says. “When you have somebody like this around, you are kind of imbued by it.”

In 1952, at the age of 22, Madeleine came to the U.S. from France on a Fulbright scholarship to study at the University of Iowa, where she met and fell in love with a fellow scholarship student, the handsome, brilliant linguist and violinist Fred Herrmann from Germany. They married, moved to California, had four children in quick succession (“Four children in three years,” she says smiling; “that was B.P. – before the pill!”), designed and constructed two houses together, and forged their academic careers.

After her husband’s sudden, tragic death in 1969, Madeleine was left to raise her four young children alone on a teacher’s salary. “It was a tough time,” she says, “but we struggled through,” thanks, no doubt, to her early training in stoicism during the war years. Madeleine retired after thirty years of teaching French in California and moved to Taos twenty-three years ago.

Madeleine stays busy and active. She and her partner of fourteen years enjoy hiking in good weather and snowshoeing in the winter, as well as international travel – recently visiting New Zealand and Patagonia. She reads a lot – keeping Eckhart Tolle’s books by her bedside table – and continues to write. This summer she finished writing her third book, a young adult novel titled “Joan of Arkansas,” about a sixteen-year-old who “wants to do something really big, like Joan of Arc” to help the environment. “Writing this was a lot of fun,” Madeleine admits.

When I asked Madeleine the same question I ask all WOW Factor interviewees, “What motivates you?” she gave me a one-word answer: