A Mexican friend recently said to me flatly that a person who doesn’t say hello to another person is a barbarian. This statement seems to sum up nicely the emphasis Mexicans place on cortesía, or courtesy (pronounced: cor-tah-SEE-ah). For Mexicans, greeting others, inquiring about their wellbeing, and wishing them a good day are not optional in daily human interactions; they’re required of a civilized person.

I’ve touched on this subject before, in a blogpost last year, in fact, which I just learned has been nominated for inclusion in Sundress Publications’ Best of the Net anthology to be published next year. So I thought, since things are still in flux in my life at the moment, with less time than ever for the tranquility I require to write something new, I’d share most of that post with you again here. It’s a topic that warrants repeating:

One of the greatest differences, I’ve found, between life in the United States and here in Mexico is this: Here, it is a large part of the rich, old, cultural fabric to recognize and respect other people, even just in passing on the street. North of the Border? Not so much.

Perhaps I lived in the city of New York twenty years too long. Smiling at, making eye contact with, and chatting up strangers on sidewalks or in subways was simply not done– especially if you were a youngish woman on your own, striving to be street-smart and stay safe.

Even as a little girl growing up in New Jersey’s suburbs in the ‘50s, I and my sisters were taught never to talk to strangers. There were bad people out there, we were led to believe, who could do us harm. So we had to always beware, keep a safe distance, and “run like hell,” if necessary, away from them. Some of this vigilance and wariness toward others has obviously stuck with me, all these years on.

When I first began private Spanish lessons with my tutor Edith five years ago here in San Miguel de Allende and asked her for secrets of success in learning the language, she said cheerily, “Práctica, práctica!” (Practice, practice!)

“But,” I countered, “how can I practice speaking Spanish when I have no one to practice with between our weekly lessons? I’m here alone.”

She suggested I walk to the Jardin (the city’s central plaza) every day and find a nice person on a park bench to chat with. She smiled. “San Miguel is filled with people who speak Spanish,” she said.

I’m getting better, though. I’m learning. I’m learning the importance of what Mexicans refer to as cortesía (courtesy, or respect), the social protocols taught to all Mexican children by their mothers.

For example: the significance of greeting everyone you meet, even strangers on the street, with a smile and “buenos dias” (good day – used between dawn and noon), or “buenas tardes” (good afternoon – from noon to sunset), or “buenas noches” (good evening/night – after sunset and before sunrise); saying “con permiso, por favor” when requesting attention or space (as in, “excuse me, may I get by?”); and offering this polite blessing on another’s meal (in passing someone’s table in a restaurant, for instance), “buen provecho!” 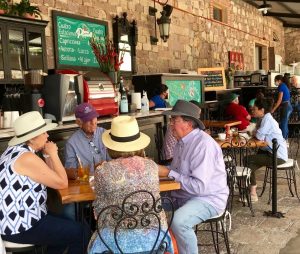 So instead of avoiding strangers, being wary and suspicious of them, as I and perhaps many other Norteamericanos were trained from childhood to do — for our own personal well being, we may have thought — Mexicans reach out to others in recognition and respect, in a spirit of we’re-all-in-this-together human connectedness. What a difference this makes in day-to-day human interactions, I’ve observed.

A lot has been said and written about the joys of living in San Miguel de Allende – the food, music, colors, art, architecture, culture, history, people, climate, overall beauty, and affordability for us retired gringos – but one aspect has not received as much attention, in my opinion. It is this contrast, this cortesía, this emphasis on respect. Especially, I’m finding now as an older person, respect for older people, regardless of nationality or background.

Yesterday I listened to Paul Theroux’s marvelous keynote address given at the San Miguel Literary Sala in February 2019 (available from their website, https://sanmiguelliterarysala.org/product-category/audio-recordings/) in which he discusses his new travel book, On the Plain of Snakes, about his most recent travels through Mexico. I listened to him as I busied myself straightening my apartment. But I had to stop what I was doing to write this down: “There’s more respect for an older person in Mexico than anywhere in the States,” he said.

I’m reading On the Plain of Snakes now, highlighting it madly as I go along. Paul Theroux made this trip alone, by car, when he was seventy-six – the age I am now – so I can relate on many levels. In regard to age he writes, in part:

“In the casual opinion of most Americans, I am an old man, and therefore of little account, past my best, fading in a pathetic diminuendo … either invisible or someone to ignore rather than respect. [But] … I think of myself in the Mexican way, not as an old man but as most Mexicans regard a senior … not worn out, beneath notice, someone to be patronized, but owed the respect traditionally accorded to an elder.”

How refreshing, how life-affirming, I feel, to be seen here and now in Mexico, not as a harmless, vapid, pretty-young-thing, which was the case for me a long time ago in New York — the only reason strangers ever glanced in my direction — but as a fellow human being, still alive, still visible and somewhat relevant, an elder worthy of a little recognition and respect because I have lived this long and, perhaps, learned a few valuable lessons worth sharing.

The following link will take you to three excellent YouTube videos that will further explain Mexico’s history, culture, and especially cortesía, presented by Warren Hardy of the Warren Hardy Spanish School in San Miguel de Allende: