In the preface to her bestselling 2018 memoir Becoming, former First Lady of the United States Michelle Obama says she thinks that What do you want to be when you grow up? is one of the most useless questions anyone can ask a child. “As if growing up is finite,” she says. “As if at some point you become something and that’s the end.”

At the age of fifty-four, then, after having left Washington, D.C., where her husband had served two terms as President, Michelle Obama was free to share her life story with the world in her own words, in writing. It’s the story of one woman’s becoming.

As she puts it: “For me, becoming isn’t about arriving somewhere or achieving a certain aim. I see it instead as forward motion, a means of evolving, a way to reach continuously toward a better self.” 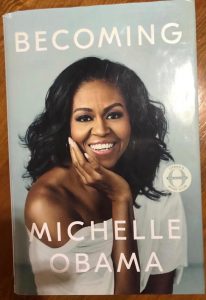 In this candid and inspiring memoir (which, by the way, was translated into twenty-four languages and has sold well over 14 million copies worldwide), Michelle Obama takes readers from her childhood in a racially mixed neighborhood on the South Side of Chicago, to her Ivy League East Coast education (Princeton and Harvard), to her marriage to Barack, and their life, with their two little girls, inside the White House over eight momentous years.

At the end of the book, in her summing up, she states, “Becoming requires equal parts patience and rigor. Becoming is never giving up on the idea that there’s more growing to be done.

“… It’s not about being perfect,” she writes. “It’s not about where you get yourself in the end. There’s power in allowing yourself to be known and heard, in owning your unique story, in using your authentic voice. And there’s grace in being willing to know and hear others. This, for me, is how we become.”

I was reminded of Michelle Obama’s memoir this week while talking with a friend here in San Miguel de Allende. She and I were discussing last week’s WOW post (www.bonnieleeblack.com/blog/to-do-or-to-be/), which surprised me by eliciting a whole lot of feedback, not only in the blog’s Comments section, but also in private e-mails to me and in-person conversations — all of which I appreciated and learned from.

The consensus in all this feedback was that it’s not a matter of “Do” OR “Be.” It’s not either/or. And as my friend rightly pointed out this week, it’s not even a question of Be-ing.

“I think it’s about becoming,” she said.

“Have you read Michelle Obama’s book?” I asked her.

So, agreeing with my friend, and with the help and backing of Michelle Obama, I’ll attempt to clarify my position regarding our “responsibilities” (my word, not Michelle’s) as older women in what Mexicans refer to as “la tercera edad” (literally, “the third age,” the last third of our lifespans):

“Becoming” is a process. It doesn’t end until we do. It means using the unique talents we’ve been given, and doing (there’s that word doing again) whatever good we can in whatever way we can right up to the end. It’s not a matter of striving to live up to others’ expectations of us, but rather fulfilling our own personal destinies, whatever they may be. And, to quote Michelle Obama once more, it means “never giving up on the idea that there’s more growing to be done.”

And I’ll go one step further: To me it means not allowing ourselves to be silenced, sidelined, or stunted by a dominant society’s deep-seated ageism. As Mexicans recognize, la tercera edad is an important stage of life. We older women are fortunate to be living in it.