American country singer Garth Brooks sang it at Joe Biden’s inauguration ceremony this past Wednesday afternoon in Washington, DC.  Internationally acclaimed Chinese-American cellist Yo-Yo Ma played it for the inaugural celebration that evening. The old, soothing hymn “Amazing Grace” has been known and appreciated around the world for centuries. But how many of us know the story behind it?

Who was this “wretch” who was “once lost,” then found; the hymn-writer who was “blind” but made to see? What had he done that was so wretched? What had he been blind to? How did he come to turn his life around and then write this iconic hymn about his profound spiritual experience?

In his wild and dissolute youth, Englishman John Newton (1725-1807) became the master of a slave ship, ferrying human cargo across the Atlantic from the west coast of Africa to the plantations of America. On one of these voyages, in 1748, when a violent storm lasting eleven hours battered his vessel and swept a crew member overboard, Newton called out for God’s grace and mercy. This moment marked his spiritual conversion.

When he was the parish priest in Olney, England, Newton began to write hymns. “Amazing Grace” was written to illustrate a sermon he gave there on New Year’s Day, 1773. “With the message that forgiveness and redemption are possible regardless of sins committed and that the soul can be delivered from despair through the mercy of God, ‘Amazing Grace’ is one of the most recognizable songs in the English-speaking world” (Wikipedia). Jonathan Aitken, a Newton biographer, estimates that the song is performed about ten million times a year.

And when asked to sing along – as Garth Brooks asked the inaugural gathering to do – many of us are able to do so because we know these words by heart and are soothed by the familiar tune:

Amazing grace! (how sweet the sound)
That sav’d a wretch like me!
I once was lost, but now am found,
Was blind, but now I see.

‘Twas grace that taught my heart to fear,
And grace my fears reliev’d;
How precious did that grace appear
The hour I first believ’d!

Thro’ many dangers, toils, and snares,
I have already come;
‘Tis grace hath brought me safe thus far,
And grace will lead me home.

In 1787 John Newton, convinced that silence, “at such a time, and on such an occasion, would, in me, be criminal,” wrote a pamphlet, his “testimony,” he called it, titled Thoughts Upon the African Slave Trade (still in print today), “which, however sincere,” he wrote, “comes too late to prevent, or repair, the misery and mischief to which I have, formerly, been accessary.” 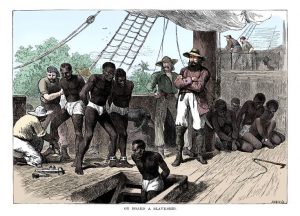 The impact of this booklet on the abolitionist movement was immediate in that it graphically described the horrors of the slave trade by a white man who not only witnessed it firsthand but participated in those horrors. This publication amounted to a moving confession of repentance for the author’s part in the hideous trade in human beings.

At this week’s historic inauguration “Amazing Grace” became the hymn for the moment, with its universal message about forgiveness, deliverance, transformation, redirection, truth, hope, and faith. New York Times Opinion writer David Brooks (a Republican), called Joe Biden a “transformational president.” Biden is the man for the moment, I believe, to take us in a new direction, out of the sturm und dring of the past four years and on to calmer waters.

And to watch a particularly beautiful 14-minute video on the history of “Amazing Grace,” go to: