Every year at this time, which is to say springtime in San Miguel de Allende in the central mountains of Mexico, when the jacaranda trees are in full bloom, dotting the landscape like purple lollipops, I’m flooded with memories.

I remember the first jacarandas that mesmerized me when I lived in southern Africa in my mid-twenties. I’d never before seen such majestic, purple-robed, spectacularly beautiful trees. These grand árboles lined the broad avenues of what was then known as Salisbury, Rhodesia (now Harare, Zimbabwe), giving it the well deserved label of “City of Flowering Trees.”

Springtime there was known as “jacaranda time” among the British colonials, when these trees came into bloom in October and November each year, springtime in the southern hemisphere. What impressed me most and inspired me then about those jacarandas was the juxtaposition of their soaring strength and their seemingly fragile beauty.

So, decades later, when I lived in the fabled city of Ségou, Mali, in West Africa, doing independent development work, I came up with what I thought was a brilliant idea: to turn Ségou into another “City of Flowering Trees” in Africa.

Knowing that August 4thwas Mali’s annual Journée des Arbes (Day of Trees), in 2000 I proposed that to celebrate this significant day the people of Ségou plant flowering trees all along the main roads.

“In years to come,” I said (in French) to the city’s powers-that-be in an effort to convince them to back my plan, “when the trees are tall and flowering, Ségou will be known as the loveliest city in all of Mali, tourists will be drawn to its beauty, and the economy will prosper as a result.”

My proposal called for one thousand healthy young trees. And I recommended where they could be purchased: from my friend and neighbor, the retired-school-principal-turned-nurseryman Abdoulaye Mariko, the perfect, local pipinieriste, who at the time was struggling to support his ever-growing family.

On the morning of the tree-planting, August 4th, about fifteen neighborhood children arrived at my house at nine and happily marched with me to the main road where the planting had begun, carrying an enormous appliquéd banner I’d made reading “Aimez la Terre: Plantez des Arbes” (Love the Earth, Plant Trees).

When a fresh supply of saplings arrived on Mariko’s charrette (donkey-drawn cart), I threw myself into helping to plant them – digging a hole with a hoe, removing the sapling’s roots from its black plastic bag, placing the tree in the center, dousing the root ball with water before covering it with soil, leaving a well-like surrounding area for rain to pool. As I finished planting each tree, the children circled both the tree and me and applauded.

It was an exciting, exhausting, and exhilarating day. Everyone was pleased. The government officials who’d authorized and partially underwritten the event seemed happy and proud. My friend Mariko was thrilled that he’d earned more in one day than he would normally have earned in four years. All of the volunteer tree planter-participants, including me, were sore but more than satisfied with our efforts.

What none of us had considered, though, were the goats. Sweet, baby trees must be particularly appealing to hungry goats. Sadly, the city’s ubiquitous, free-roaming goats got to these newly planted saplings before any effective goat-barriers could be erected. Within days, all of the trees were decimated, eaten by goats. This well intentioned plan became just another development dream that ultimately died. The forces of nature in Africa, I found, have a way of overriding human plans.

Here in San Miguel now, whenever I stop to admire the towering jacaranda trees in full bloom, I think:  Who planted these trees? And how long ago was that? How did they manage to protect them from the goats? Surely there were lots of hungry, roaming goats in the streets back then?

I thank God for those planters’ efforts and their foresight. And I’m unspeakably grateful for this annual gift of springtime splendor in this city.

Here are just a handful of jacaranda photos from my walks in my neighborhood this week: 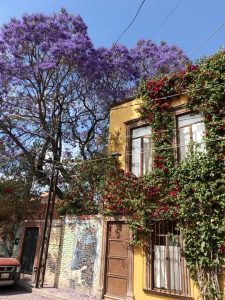 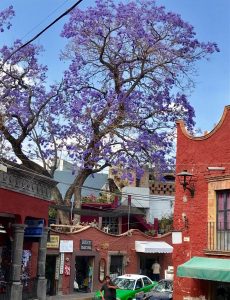 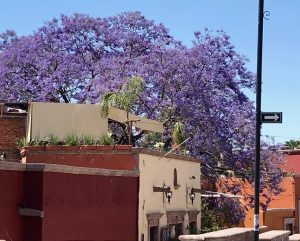 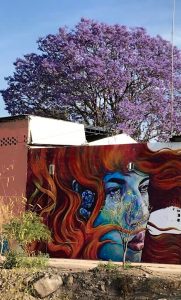 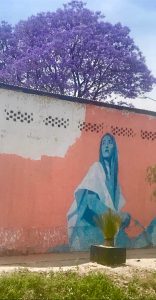 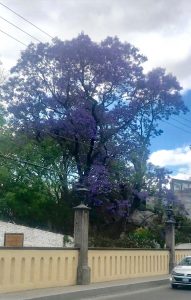 For more on jacarandas, go to www.bonnieleeblack.com/blog/jacaranda-time/.

And for the full story of my work and life in Ségou, Mali, please read my memoir How to Make An African Quilt (Nighthawk Press, 2013), available at www.nighthawk press.com as well as www.amazon.com .