The city of Guanajuato, as I’ve seen it described in one of my Mexican guidebooks, is shaped like a big salad bowl. El Centro, at the bottom of the bowl, is where you’ll find the world-class university and museums, the libraries, shops, and main markets, and my language school (Escuela Mexicana) and lavanderia (laundromat), among countless other necessities. Running up the sloping sides of the bowl are the residences, like colorful stacked boxes, with narrow, steep staircases wending their way up and down in between. 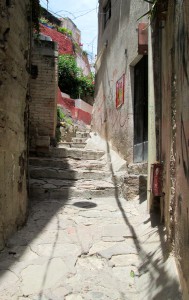 Getting down to El Centro, aided by gravity’s pull, is a breeze. It’s getting back up to your casa, which in my case is near the rim of the bowl, that represents a challenge. People with money for taxis, of course, don’t even attempt it. But since one of my reasons for being here for this four-month stay is to determine whether or not I can live simply (and happily) on my Social Security income in Mexico, I choose to live like “the people” — as I learned to do in the Peace Corps in Gabon — and walk. Daily taxis are not in my budget.

Walk? Did I use the word walk? Walk is too mild. Climb is more accurate. It’s a climb. And although I was in pretty good shape when I arrived here two weeks ago, I find myself sweating and panting by the time I reach home. If I’d come here to lose weight, I would have succeeded in that goal already. Who needs a gym membership or step classes when you can have this for free?

On a couple of my walks into town recently I’ve seen an old, old woman who has captivated me. She is walking up as I’m walking down. She walks slowly but assuredly. She is small, no bigger than a nine-year-old child. She has a length of cloth (or is it a tee-shirt?) draped on her head and shoulders to protect her from the sun.

She carries small bags in both hands. She is brown and wiry and, I think, beautiful. I greet her with “buenas tardes,” and she responds, softly, in kind. I want to go further and ask whether I could take her photo (“because I think you’re beautiful,” I want to say); but I’m too shy, and I lack the correct Spanish words. Would she understand? I worry. So I don’t try.

She reminds me of my maman in Gabon, whom I called Leora and whom I visited every day on my walks into town (also down a steep hill) to the marché. As I recounted in my memoir of my Peace Corps experience, How to Cook a Crocodile (Peace Corps Writers 2010), Leora was unusual:

“Not only was she truly elderly – decades older than the fifty-two-year life expectancy for Gabon – but she lived alone. She had no family. She had traveled, she was literate, and she spoke fluent French. She was independent: She supported herself entirely by selling her homemade saucisson sandwiches [at the market]; and every morning, regardless of the weather, she walked almost a mile to and from the marché in bare feet” (p. 57).

Women such as this, who are icons to me, can be found all over the world, I’m sure, in what we in the “First World” might consider out-of-the-way places. I can picture other old, wiry women trudging up hills to and from their villages in all of the Mediterranean countries, for example. Their legs — and hearts — are strong. They live long. They may appear sun-dried and wrinkly, but they’re beautiful to me.

In El Centro I’ve also observed some handsome, well-dressed Mexican dowagers – plump and pampered-looking in their pumps and pearls and parasols. I imagine (maybe wrongly) that their manicured hands have never known dish detergent. I imagine (maybe wrongly too) that they don’t need taxis because they have cars and drivers. They look at me, walking by in my rumpled cotton tank top and khaki pedal pushers, as if to say, “Aren’t I beautiful?” I have no desire to take their picture.

No, it’s the mysterious old woman with the cloth on her head whom I hope to photograph one day soon. She is the picture of true grit to me. She inspires me. I will look at her photo every day and say to myself, If you can climb this staircase, señora, so can I.