San Miguel de Allende is a relatively small old colonial city here in the central mountains of Mexico, but it is big – really big – in  beauty and culture, civic awareness, and global involvement.

Take, for example, the Climate Action Rally held here on Friday (September 20) in the city’s central Parque Juarez. The event was bilingual, multicultural, and multigenerational. Hundreds of people – from toddlers to octogenarians – took part.

School children (clearly not all of San Miguel’s school children got the day off, though) held signs and sang “This little light of mine, I’m gonna let it shine!” Older people wore T-shirts that read “Global Climate Strike” (in Spanish and English). Speakers from a dozen local environmental groups spoke passionately to the respectful gathering. One of the organizers led the group in a loud call-and-response: “Do not let our planet die!” — “Climate change is not a lie!”

But San Miguel’s effort was just a small part in what is now being called the biggest one-day environmental protest in world history. As the New York Times reported on Saturday, September 21, “masses of young people poured into the streets on every continent on Friday for a day of global climate protests. Organizers estimated the turnout to be around four million in thousands of cities and towns worldwide.”

Sixteen-year-old climate activist Greta Thunberg of Sweden is credited with igniting this global movement. As she said to the thousands of demonstrators in New York on Friday, “Right now we [young people] are the ones who are making a difference. If no one else will take action, then we will. We are a wave of change.”

Speaking about Friday’s demonstrations, Kumi Naidoo, head of Amnesty International and a longtime campaigner for environmental issues, said, “I certainly hope this is a turning point.”

I believe it is. In my view, if these wise young climate activists around the world have their way – and I believe they won’t stop until they get their way – things will change. I believe this because I’ve seen the signs.

Here are some images from Friday’s rally in San Miguel, to help make you feel as if you were there with me, reading the signs: 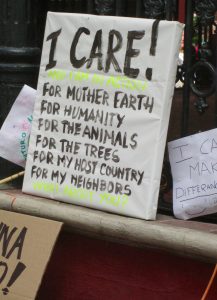 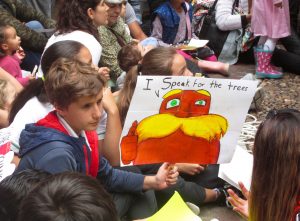 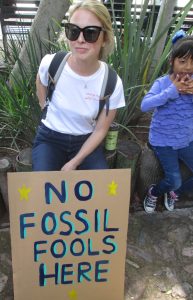 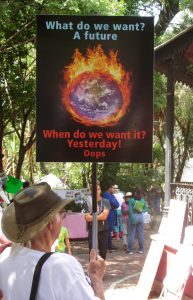