It’s back! Last year the Candelaria plant-and-flower fair (Feria de la Candelaria) here in San Miguel de Allende was cancelled due to COVID. But this year, gracias a dios, as Mexicans frequently say, it’s back — in the clean, open air, gracing elegant old Parque Benito Juarez with its spectacularly lush and colorful offerings for sale.

Celebrating its sixty-sixth anniversary this year, this annual rite of spring opened on Friday, January 28th, and will run until Friday, February 11th, from 8 am until 8 pm every day, giving garden lovers — and who isn’t a garden lover? — an endless array of choices: flowering and ornamental plants, fruit trees, bonsais, fresh herbs, succulents, terracotta pots, rich potting soil, and much more.

Throughout the day there is music in the air and refreshments available, then at six every evening there is free entertainment for the whole family, outdoors in the central basketball court.

For me, la Candelaria spells EUPHORIA. It’s a celebration of primavera — springtime — my favorite season of the year. And, again, gracias a dios, spring arrives early here in the central mountains of Mexico, with afternoon highs now hovering around 75 degrees (F.), and sunny, cloudless, cobalt-blue skies every day. Bliss.

Beyond its religious significance in the Christian tradition (Candelaria is the Spanish word for Candlemass), la Candelaria also marks the mid-point between the winter solstice and the spring equinox, which is the basis for various ancient European celebrations that commemorate the annual start of the agricultural season. And, I also learned, it is the beginning of the solar calendar used by Mesoamerican cultures, a time to honor the earth and bless the seeds that will give new life.

Here is a handful of photos meant to tempt you to come to this year’s fair, if you can, before it ends on the 11th. And if you can’t make it to San Miguel’s Candelaria 2022, I hope you’ll put it on your calendar for next February. 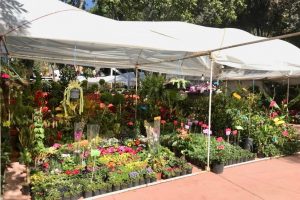 Today, Saturday, February 5, members of the newly formed San Miguel branch of the International Watercolor Society (IWS) met at the Candelaria fair to paint en plein air (in the open air), and I was happy to be among them. (See my post about our first plein air outing last November: www.bonnieleeblack.com/blog/in-plein-air/ .)

If you’re in the area and are interested in joining SMA’s IWS group and learning about the many benefits of membership, contact Linda Whynman at vellum1@mac.com . If you live elsewhere in the world, go to the International Watercolor Society’s website to learn about the IWS group nearest you (https://iwsglobe.org/about-us/ ).