When the young Ray Bradbury was thrashing about for a suitable title for the novel he was then working on (its working title at the time was pretty boring — “The Fireman”), he made a call to his local fire department in Los Angeles to ask at what temperature paper books ignite.

“Four hundred and fifty-one degrees Fahrenheit,” the fire chief told him. “Perfect!” Bradbury replied. So that became the title of the dystopian, science-fiction book published in 1953, which was destined to sell more than 10 million copies and make Bradbury famous: Fahrenheit 451.

The fireman of the working title and hero of the book is Guy Montag, a thirty-year-old, married, childless man who lives in a nameless American city sometime around the mid-21st century and whose job it is to burn down homes known to contain books.

Possession of books in Montag’s world is a crime against the State, so firemen use their powerful hoses to spray, not water, but kerosene, then set each place ablaze. Sometimes with the book-loving owner choosing to remain inside.

But slowly, initiated by a chance encounter with an inquisitive and spirited young woman in his neighborhood, Montag undergoes a kind of religious conversion. He begins to doubt. What’s worse, he begins to hoard and read books himself.

His boss, the fire chief, named Beatty, becomes suspicious and harangues him:

“Ask yourself,” Beatty says to Montag, “What do people want in this country, above all? People want to be happy, isn’t that right? Haven’t you heard it all your life? I want to be happy, people say. Well, aren’t they? Don’t we keep them moving, don’t we give them fun? That’s what we live for, isn’t it? For pleasure, for titillation? And you must admit our culture provides plenty of these.

“Colored people don’t like Little Black Sambo,” Beatty shouts. “Burn it. White people don’t feel good about Uncle Tom’s Cabin. Burn it. Someone’s written a book on tobacco and cancer of the lungs? The cigarette people are weeping? Burn the book. … Fire is bright and fire is clean.”

Montag’s wife Mildred, who, like most everyone else, is addicted to the State-sanctioned entertainment programs she watches all day on the huge, flat-screen TVs that cover three of the four walls of their living room, ultimately informs on him and wordlessly leaves him. He flees for his life. (I won’t spoil the ending for you.)

Neil Gaiman, who wrote the Introduction to the edition of Fahrenheit 451 I read, calls the book “Bradbury’s love letter to books.” I totally agree. 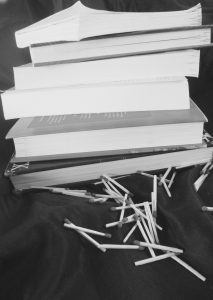 Like Montag, I’ve come to learn that books are indeed dangerous. Good books make people think. When people think, they begin to question. And when people question aloud, they can no longer be part of the passive, docile, silent herd. So, historically, authoritarian leaders (such as Donald Trump is proving himself to be) view books as a threat to their power and control. Books, therefore, they feel, must be devalued, put down, or even destroyed.

My friends will disagree with me, of course, because my friends are book lovers, serious serial readers of good books, members in good standing of long-standing book groups. But I believe that books as we’ve known them could be on their way out, that reading good books is already considered passé.

I sometimes fear these beloved friends of mine may be living too close to the trees to see the forest. I suspect that the forest out there is beginning to burn. (Think about it: Would a predominately book-loving and -valuing electorate choose as president a man who never bothers to read books?)

I believe, in fact, that my book-loving friends and I are a dying breed. Therefore, part of our our legacy must be to actively advocate for book reading among the generations we leave behind. We should take to the streets (if only figuratively speaking) with banners that read, “Don’t let books die!” and “Don’t let anyone destroy good books!”

When Fahrenheit 451 came out in October 1953, at the height of the Cold War and the chillingly mean-spiritedness of the McCarthy era (which, sadly, have parallels to today), it received a glowing review in The New York Times. This review, by Orville Prescott, certainly helped launch the book’s success. Prescott wrote (in part):

“Ray Bradbury’s basic message is a plea for direct, personal experience rather than perpetual, synthetic entertainment; for individual thought, action and responsibility; for the great tradition of independent thinking and artistic achievement symbolized in books.”

So if it’s been a while (high school?) since you’ve read Fahrenheit 451; or if you, like me, had never read it before (shame on me), now is the time to reach for it, read it, and be moved to action by it.