By now we all know about the health benefits of a nutritious daily diet – we’ve been saturated with such information for decades – so you need no reminders from me.

Nevertheless, I still find I occasionally need reminders. It’s just too easy, as a single older person living on a fixed income, to skip meals, skimp on groceries, not bother with cooking for one. A bowl of Campbell’s soup and a hearty little sandwich could easily become my only real meal every day.

So I keep this silly greeting card on my fridge, a souvenir from the days when I taught healthy cooking – in Manhattan at a prominent cooking school, in the Peace Corps in Africa as a health and nutrition volunteer, and in Taos, New Mexico, in a college-level course: 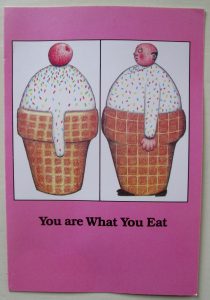 And I frequently consult the “ChooseMyPlate.gov” plate I invested in when I taught healthy cooking at UNM-Taos, just to refresh my memory: 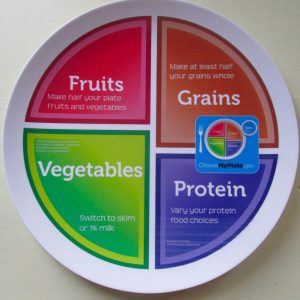 “Make half your plate fruits and vegetables,” the plate states. Oh, really? Who among us (who is not a devout vegetarian) actually DOES that? I know it’s something I need to constantly strive for.

After my now-famous fall last January, when I went to the young and adorable Dr. Erick at the consultorio (see my post “After the Fall” for more about him), he must have noticed (how? from my broken nails? my dry-and-dull hair? the dark circles under my eyes?) that I was undernourished. So among his prescriptions was a large packet labeled MultiMix (available only from the farmacia Similares here in San Miguel de Allende) – a vitamin-and-mineral dietary supplement in powder form that I’ve been adding (along with protein powder) to a fresh-tropical-fruit smoothie every morning ever since.

What a difference these smoothies have made to my healing process! I feel healthy again.

And it’s not just food, I believe. We are what we consume in every aspect of our lives: We are the books we read, the news we digest, the lectures and performances we listen to, the television programs and movies we watch; everything we take into ourselves to feed our other hungers – of the heart, the soul, and the mind. Not just the body.

I was reminded of this the other night when I happened upon the 2010 film, “The Traveler,” starring Val Kilmer and Dylan Neal, in English with Spanish subtitles, on my TV. I’ve never liked horror films, but this one was horrifyingly captivating. I was so paralyzed by it I couldn’t turn it off. I had to see it to its conclusion.

It was beyond grizzly, beyond bearable. Blood, guts, gore, savage cruelty and torture, a severed head rolling from an open car door, creepy music… I kept asking myself, Why are you allowing all of  this to enter your brain? You’ll have nightmares for weeks!

The next morning, after waking from a bad dream (not prompted, I don’t think, by this film), I researched “The Traveler” online and found that one reviewer called it “a fetid slice of supernatural tomfoolery that will insult your intelligence every chance it gets” (Todd Rigney of Beyond Hollywood). Indeed.

Imagine, I thought, having a steady diet of such horror films – what a horror your life would be!

And this goes for the news, too. Now that I no longer get American news programs on TV, I’m feeling much healthier, gracias a dios. I still read the news online every morning, but I no longer have CNN’s “Breaking News!” out of Washington breaking my heart every day. I still care, of course, about world events, and I do all I can within my sphere to try to make things a little better.

But I’m no longer consumed by events over which I have zero control. It’s taken a while, but I’ve come to realize I can no longer allow that sickening man who’s sullying the White House (and tarnishing the U.S.’s image in the eyes of the world) to make me sick.

When my siblings and I were kids, my mom had a few food rules that were well worth following. One was, “Junk food isn’t FOOD! It’s JUNK. Don’t put it into your body.” She equated junk food with plastic: inedible. She didn’t allow us to watch scary movies either, believing that real life could be scary enough.

She was not a highly educated woman, but she was wise in many ways. She knew that what we consume becomes who we are. And it is our own personal responsibility to be as healthy as we can be. But sometimes even I, knowing all of this, forget.