The sight of those men marching with lit torches – hundreds of men, many as young and clean-cut, it seemed to me, as my beloved grandson – spewing white supremacist and nazi hatefulness into the entire country and the world from the streets of a beautiful American city last weekend flattened me.

Even from this distance, here in the rolling, green central mountains Mexico, I was felled as if by a tidal wave by the horror of that scene. I’ve been sick in bed ever since. My head, heart, soul and guts ache. I can’t even eat.

What can I say that hasn’t already been said and is still being said by writers and journalists more qualified than I? Should I choose another, lighter, subject, better suited to some readers’ preferences? Sunshine and palm trees, perhaps? Hummingbirds and pussycats? Guacamole and tortilla chips?

So for the moment, until I regain my strength and everything I’m made of stops aching, I must remain silent. I don’t have words. This is a time, I think, to lean on poets’ wisdom, to allow the bits and pieces of poems I’d memorized when I was young, which have been swimming around in my subconscious all these years, to bubble up to the surface and come to the rescue.

Here’s one. It is a fragment from Sylvia Plath’s poem “Channel Crossing” that has helped me cross over many rough waters in the past and is helping me again now:

“…what better way to test taut fiber
Than against this onslaught, these casual blasts of ice
That wrestle with us like angels; the mere chance
Of making harbor through this racketing flux
Taunts us to valor. …” 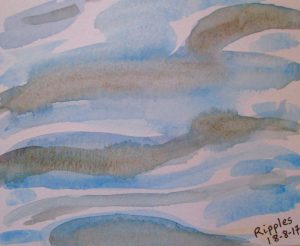