Gloria Steinem, now 80, needs no introduction, nor any promotion, from me. This American icon – feminist, activist, journalist – has already made an indelible name for herself in our world, in our time.

In February next year I’ll be seeing Gloria Steinem in person for the first time at a writers’ conference I’ll be attending in San Miguel de Allende, Mexico, where she will be a keynote speaker. Well in advance of the conference, we attendees have received a list of books written by the featured speakers; and I, bookaholic that I am, have ordered them all. 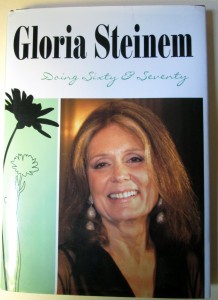 Gloria Steinem’s newest book, published by Elders Academy Press in San Francisco, Doing Sixty & Seventy (2006), is a slim volume of her personal essays on the subject of aging and ageism. Most of us will recall the famous line she spoke forty years ago: “This is what forty looks like.” At the time, I quite wrongly misinterpreted her remark as braggadocio: “You, too, can look this good at forty!” But in this book I learned her intent was altogether different: It was a bold (at that time) “coming out” about her age.

“…[W]hen I turned forty,” she writes, “I did so publicly – with enormous relief. When a reporter kindly said I didn’t look forty (a well-meaning comment but ageist when you think about it), I said the first thing that came into my head: ‘This is what forty looks like. We’ve been lying so long, who would know?’ That one remark got so many relieved responses from women that I began to sense the depth and dimension of age oppression, and how strong the double standard of aging remains. Since then, I’ve learned that for many women, passing [for younger] and worrying about being found out is as constantly debilitating as an aching tooth – since one has to conceal the pain, perhaps more damaging.”

I clearly recall my own mother’s fear of aging and her seemingly desperate efforts to pass for younger than her years. The fact that she turned thirty-six every year on her birthday became a family joke, but in other ways – such as falsifying her birthdate on her driver’s license – she took it too far. Even her employer didn’t know her true age. I vowed at the time not to follow her lead in this regard.

Steinem’s book is a comfort and an encouragement. As she has done with all her other worthy causes, she courageously speaks the truth about aging and ageism, especially for women. She says:

“What we all need, whatever our age, are personal role models of living in the present – and a change that never ends. We need to know that life past sixty or seventy or eighty is as much an adventure as it ever was, perhaps more so for women, since we are especially likely to find new territory once the long plateau of the ‘feminine’ role is over. Explorers of this later-in-life region have always existed in some number, but now their lights dancing on the path ahead will guide many more.”

Gloria Steinem in Doing Sixty & Seventy provides us with some “lights dancing on the path ahead.”