Last month, on the first night of the Summer Writers Series at SOMOS (the literary nonprofit, Society of the Muse of the Southwest, here in Taos), Stephanie Sydoriak of Los Alamos, NM, stole the show. Dressed in a traditional Ukrainian, brightly embroidered costume and reading from her beautifully written memoir, An Ocean Between, she held the audience in her spell.

In her memoir, which was published in 2011, Stephanie, now 87, recounts in vivid detail her life as the child of Ukrainian immigrants who settled in Boston before the breakout of World War I, and the stories – sometimes bewildering, sometimes conflicting – her parents told her about their earlier lives.

“I didn’t realize until my later years,” she writes in An Ocean Between, “how lucky I had been to have parents who were such driven storytellers. I had each to myself, Mama at lunchtime [before she left for her two menial jobs] and Tato [her father] at supper [after he’d spent the day searching futilely for work during the Depression].” She continues:

“Both Mama and Tato told their stories to me in Ukrainian. Tato’s delivery was the more dramatic … His stories ranged from his birth in 1887 in the town of Kozova in Eastern Europe through his impoverished early life and on into his life as an immigrant in America. They inevitably ended in a lecture on Ukrainian history or American politics.

“Mama’s stories were told in a quieter tone. She spoke with yearning for the sweetness of the Old Country that contrasted so sharply with the bitterness of her life in America. She spoke rarely of history and politics, so I had no trouble understanding her simpler words, bright with the colors of blooming lilacs and the fragrance of baking bread.”

Each chapter of An Ocean Between alternates between the mother’s and the father’s stories, taken in — as if recorded verbatim — by their precocious American-born child as the little girl ate her simple meal of a baked potato and drank a cup of Ovaltine. Fortunately for the reader, that daughter, Stephanie, was blessed with an exceptional memory and their storytelling gifts as well. 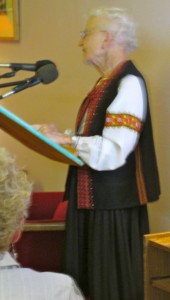 Prior to her reading at SOMOS, I interviewed Stephanie to learn more about her life and her memoir. As a memoir writer myself, and a teacher of creative nonfiction writing, I was especially curious to know how she had managed to remember so many specific details.

“Oh, I heard their stories over and over and over,” she told me, smiling. “So I remembered all of it. I started writing them down, probably in high school, and I wrote tidbits toward the book ever since, whenever I could find some time. But life always intervened.”

Stephanie’s life has been full. Immediately after her marriage to Steve Sydoriak in 1945, Stephanie and her husband entered Yale Graduate School of Physics, then moved to Los Alamos, where they raised six children. She cared for her aging mother and her older sister until their deaths at 100 and 97, respectively; and she cared for her husband as he declined over a fifteen-year period from Alzheimer’s. He died in 2003.

An Ocean Between has been a lifetime in the making, and it stands as a shining inspiration to women, especially aspiring women writers, of all ages. 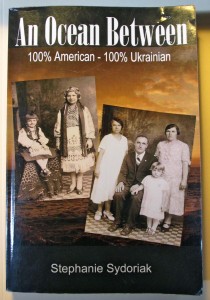 In 2011, at the age of 84, Stephanie was named a Living Treasure in her hometown of Los Alamos for her lifelong contribution to the community. “This honor was quite overwhelming for me, actually,” she told me softly. “It was a wonderful feeling of recognition.”

And now, I wanted to know, what does it feel like to be nearing 88 years old and still so strong and vital?

“There’s something rather nice about being master of your own ship,” she said. “I’ve ticked off all the things on my bucket list; I’ve done all the things I’ve wanted to do. So there is an advantage of coming to this age. Not the aches and pains, of course, but all the rest. It’s what you make of it.”

(To obtain Stephanie’s memoir, An Ocean Between, contact her directly at ssydoriak@gmail.com.)

11 thoughts on “Stephanie: An Inspiration and Living Treasure”