On Thursday my friend Kim and I went for a nice long hike. Forgoing the turkey (she’s a vegetarian) and all the trimmings (trappings?), we packed some bread and cheese and a small container of red wine (all verboten, we later learned – but, then, who knew?) and ate it slowly while sitting on a big, old log by the water’s edge, serenaded by wild ducks.

It was a glorious Mexican late-November day – bright, clear-blue sky, in the mid-70s F. (No snowstorms! No cancelled flights!), and we felt deeply thankful to be embraced by the beauty of Nature at San Miguel de Allende’s 220-acre botanical garden, known as El Charco del Ingenio. 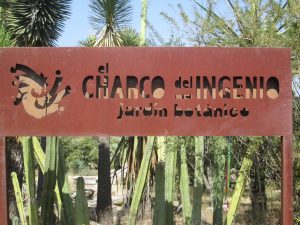 According to the guidebook I’d brought with me on our hike, The World of San Miguel de Allende: An Uncommon Guide, by Robert de Gast (which I highly recommend to anyone interested in visiting this beautiful colonial city in the central mountains of Mexico), El Charco is “one of San Miguel’s treasures”: 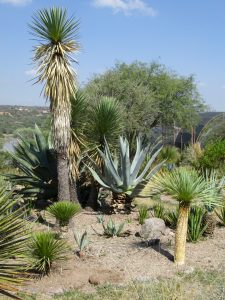 On our miles-long hike along El Charco’s well maintained trails, Kim and I passed countless towering cacti and succulents. Mexico, we learned, has the richest variety of cacti in the world; and this botanical garden’s collection is made up of plants gathered from all parts of the country. 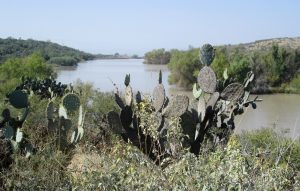 Again, I learned from de Gast that El Charco “was created in 1990 to preserve land on the outskirts of San Miguel. The preserve surrounds a canyon and reservoir about a mile above the city.”

When Kim and I crossed the dam spanning the reservoir, we discovered a grand, boat-shaped sculpture built of flagstone, labeled the “Starship” on our map, which, upon entry, became a maze of twists and turns to get to the top. (So much like life, I thought.)

And I couldn’t help but think: Some of us, too, are oddly shaped inside. Our life experiences and foreign sojourns have made us this way. We just don’t fit into traditional molds or the often narrow expectations of the cultures we were born into. I’ve learned over time, though, that that’s okay.

I take heart from the famous old prose poem “Desiderata,” which says, in part:

“Beyond a wholesome discipline, be gentle with yourself. You are a child of the universe, no less than the trees and the stars; you have a right to be here.” (To read it all, go to: https://www.desiderata.com .)

So this past Thursday, which was Thanksgiving Day in the States, I felt especially thankful to be sailing on this special starship made of Mexican stone:

My friend Kim, an intrepid traveler who is dedicated to helping raise awareness of the plight of refugees and migrants all over the world, is the author of the outstanding nonfiction book, A Country Within: A Journey of Love and Hope During the Refugee Crisis in Greece. Visit her author’s page at: