This is the time of year when friends here in San Miguel head for the beach. Even now during COVID they can’t seem to resist the siren song of the sea. So they take all the necessary precautions and hop on a plane for a short flight — or take a bus for a much longer ride — to the Pacific coast of Mexico to stay for a few weeks at their favorite beach resort town.

Being a landlubber myself, and perfectly content to remain in this lovely landlocked old city of San Miguel de Allende in the country’s central mountains, I can’t really relate to my friends’ deep yearning for sand and surf. I’d rather walk on solid cobblestones than on shifting sand. And I must have been tossed one too many times as a small child in the surf at Jones Beach in New York to be drawn to the ocean’s waves. But I do love to see my friends’ beautiful beach photos on Facebook. Who doesn’t love seascapes? 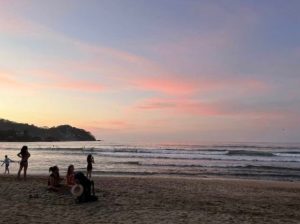 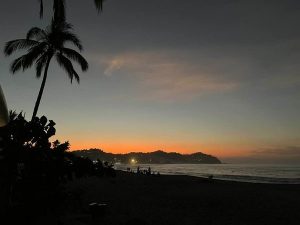 We amateur artists paint what we love and know, I guess, what is near to our hearts and filling our minds. But this new watercolor interest of mine (which feels like I’ve fallen in love) and my friends’ photographs of the Pacific Ocean on Mexico’s beautiful west coast have flooded me with memories of my beloved paternal grandfather, John Black, an amateur artist who painted seascapes.

I wrote about John Black’s parents Helen and William Black in my novel Jamie’s Muse – how and why, I thought, they came to emigrate to South Africa from their home in the charming village of Kirriemuir, Angus, Scotland, and how, I imagined, they came to an early end. And I wrote about John’s later life in my memoir Somewhere Child. Here is an excerpt from that memoir that tells the story of John’s obsession with the sea:

My parents were the children of immigrants who had settled in the same town in New Jersey during the early years of the 20th century. My father’s father, John Black, whom we called Pop, was a Scotsman, born in Natal, South Africa, in 1885, who was orphaned at a young age, sent to an orphanage in Edinburgh, ran away from that orphanage in his early teens, and came to the United States as a stowaway on a ship.

He later met and married a young woman from Glasgow named Jessie and started his own successful business as a house painter, the income from which his frugal wife amassed beneath the cushions of their sofa.

Pop was a quiet, unassuming man, tall and thin, who reminded me then of a smiling Abraham Lincoln without hair. He spoke with a thick Scottish burr, which I loved but sometimes had difficulty understanding. Whenever we kids would tease him, “You talk funny, Pop,” he’d just laugh. We’d never dream of talking to our own father that way; we were too afraid of him.

When my youngest sister was born, in August 1950, my other sister and I stayed at Pop’s for a week; and we found – in the course of our clandestine explorations – that Pop had a secret art studio in his attic, filled with clean canvases, tubes of oil paints, bouquets of paintbrushes in coffee tins, and dozens of completed paintings of many-masted ships on wild, stormy seas.

All day, in his white overalls and work shoes, Pop stood on a wooden ladder painting the interiors and exteriors of rich people’s houses. But at night, we discovered, when he came home, he stowed away in his own attic, where he stood at his easel in the dim light of one dangling bulb and created dramatic oil paintings of what he remembered of the sea.

~ To see a map of some of Mexico’s better known beach resorts, go to:

~ To read an up-to-date article on the 30 best beach towns in Mexico, go to: