Whenever I hear that others have no fear in the dentist’s chair, I’m actually stunned. Do you mean to tell me there are people out there who’ve NOT been traumatized by a dentist (or two or three) in their lifetimes? Am I the only one? I wonder.

This past week I had to have a root canal done here in San Miguel de Allende, the second time I’ve had this procedure performed by the same supremely able Mexican endodontist. His name, if I heard him correctly in my deafening fear and trembling, is Orlando. He is young, handsome, earnest, and focused.

The first time I saw him, which must have been late last year or early this year (I’d blotted it from my memory until this urgent office visit this week), I gripped the chair as if it were a life raft, and tears rolled down my cheeks.

Orlando asked me softly in his hesitant English, “Am I hurting you?”

My mouth was too full of equipment to speak. I shook my head.

“You have had trauma,” he said. It wasn’t a question. 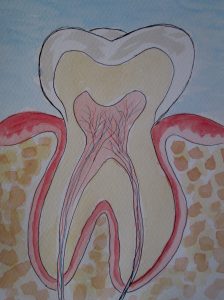 So as he worked methodically and painstakingly to remove the root of the problem in my offending molar, I tried to drill into the root causes of my dental trauma. In all other aspects of my life, I like to think, I’m a big, brave, fairly fearless woman. In the dentist’s chair, however, I’m a mess.

Maybe like most things this all started when I was very young: Sitting in the waiting room of my mother’s then-dentist, I listened to his loud, whining, whizzing drill, heard my mother’s whimpering and outright cries, and felt the overwhelming need to rush in there and save her. I was smart enough to know, though, that the dentist’s receptionist would bar my entry. Plus, it was my “job” to “be a good girl” and look after my two younger sisters until my mother reemerged from that torture chamber.

(A little later I learned that this dentist’s wife committed suicide by hanging herself in their hall closet. I was shaken by this news but not surprised. I felt sure he drove her to it.)

Much later, in another New Jersey town, the dentist I was sent to – on my own, because his office was across from my grammar school – was always drunk and reeked of booze. When I cried and squirmed in his chair, he told me to “shut up and sit still.” Tooth aches became preferable to me than being subjected to his wayward drill. I couldn’t complain about him at home, though, because I knew he was one of my father’s drinking buddies and he was likely offering his professional services at a discount.

And much, much later, when I went to an amiable dentist on New York’s Upper West Side and told him in jest, “I’d rather have a baby than have a tooth drilled,” his face brightened. “Well, we can arrange that!” he said, his eyebrows twitching.

This worked well for a number of visits until one time, arising from the gas’s spell, I discovered his hands under my blouse. I never reported him (perhaps because the bar I set for most men is so low), but I never went back either. I learned subsequently, however, that another woman did report his aberrant and unethical behavior to the authorities. She took him to court, and he was sent to prison.

Which brings me back to sweet Orlando. During this week’s root canal, I was, as ever, terrified. I clasped my hands together tightly and did deep-breathing exercises. He administered so much novocaine I’m sure if someone had punched me in the jaw I wouldn’t have felt it. Yet the sound of the drill alone seems to give me PTSD.

Orlando tapped my hands lightly and whispered, “Try to relax.”

As he alternately drilled and sprayed and dug deep to pull out roots over the course of one-and-a-half tense hours, I kept my eyes closed for the most part, only occasionally opening them to observe his mahogany eyes focused on my roots.

“Lo siento” (I’m sorry), I said to him when it was all over and I unclenched my hands. “Estoy muy dificil” (I’m very difficult).

By this stage of life (three score years and ten-plus), most of us, I think – that is, if we’ve been out there on the playing field and not sitting in the bleachers – have experienced heartaches (along with occasional tooth aches) and traumas in one form or another. Our lives, it seems to me, are like big scribbles, the picture of a knotted, tangled ball of string. We’re so oddly shaped inside, it’s a wonder we can mesh with anyone else.

Who can understand what we’ve been through? And, furthermore, I often think, Who cares?

Well, once in a while someone does understand and care to some extent, I’ve found. This week that someone’s name was Orlando.

(Another large and practical benefit of going to a gentle Mexican dentist is the price. A root canal [as well as all other dental procedures] costs a fraction – roughly one-quarter — of what it would cost in the States.)