Truth, as we all know by now, can be stranger than fiction. But fiction can also be an excellent conduit for truth, I’ve found. Take, for example, one of the chapters I read in bed before turning out the light last night in Anthony Doerr’s brilliant new novel, All The Light We Cannot See. 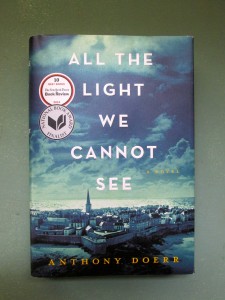 In this chapter, titled “Old Ladies’ Resistance Club,” a group of older French women in the seaside citadel of Saint-Malo occupied by the Germans during World War II get together clandestinely and decide to — within their own small spheres and in their own quiet, subtle ways — commit sabotage: Throw monkey-wrenches, so to speak, into the enemy-occupiers’ well ordered war machinery.

Madame Ruelle, the baker’s wife, straps a stepladder to the roof of her husband’s car and drives out at dusk to rearrange road signs. “Dinan is now twenty kilometers to the north,” she tells her co-conspirators. “Right in the middle of the sea!”

Madame Carre, the florist, learning that the German garrison commander is allergic to goldenrod, tucks great fistfuls of it into an arrangement headed for the chateau and later learns of his great discomfort.

As Doerr describes it, “The women funnel a shipment of rayon to the wrong destination. They intentionally misprint a train timetable. Madame Hebrard, the postmistress, slides an important-looking letter from Berlin into her underpants, takes it home, and starts her evening fire with it.”

The women get together and report on their “work.” They cackle and clap, gleefully. “Seventy-six years old,” Madame Manec, the ringleader,  whispers, “and I can still feel like this? Like a little girl with stars in my eyes?”

“This book is a work of fiction,” the front matter states plainly. And these French women are minor, fictitious characters in Doerr’s acclaimed novel. But the truths conveyed in just this one short chapter are enormous to me. Without surrender or acquiescence, without resorting to guns or bombs or cruelty, because their long lives have made them wily and wise, because they’re nearing death and have little now to lose, these women find the courage to risk and resist. And then reassemble for tea to share the stories of their exploits. And laugh at the absurdity of it all.

I have no doubt that women such as these existed and acted bravely against evil during World War II — and in all other such periods of dark history. I know it’s true that such wise and wily courageous older women exist all over the world today. I believe their stories, in fiction and nonfiction, deserve to be told and shared.