When you unbolt the door that leads from the outside alleyway into the inner courtyard at this casa, before you carefully walk down the steep, curving staircase (sans handrails) to get to the casa’s locked front door, you see, down below, leaning against a very tall stone-and-cement wall, a long, green road sign that reads “El Paraiso,” with an arrow on it pointing up, toward, in this case, a rickety old foot ladder that leads, well, nowhere. (Unless someone dared to climb the ladder to try to scale the cement wall that’s topped with chunks of imbedded broken glass.) 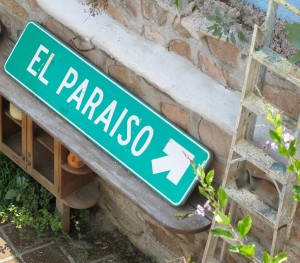 Every day when I open that outer door and look down, giddily, at that sign I find the sight, alternately, funny and evocative. There’s a story, there, I say to myself; something along the lines of: The way to Paradise is fraught. I tell myself I should give this more thought and write about it some day….

Meanwhile, a new Mexican friend has his eye on that sign. It turns out that he named his rancho-to-be out in the countryside, about a half hour from the city of Guanajuato, “El Paraiso,” and the sign would surely fit there.

He took me to see the place one recent afternoon, and I had to agree. The spot where he has chosen to build his own home, what he calls his rancho, is heaven on earth. The city of Guanajuato is fascinating, to be sure; but this slightly elevated piece of land, seemingly in the middle of nowhere, with its 360-degree, unobstructed views of undulating verdant terrain, is my idea of paradise too: 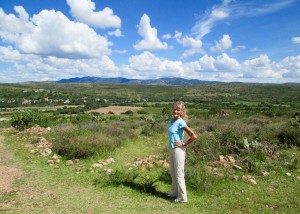 He showed me the piles of rocks he’s painstakingly gathered – greenish ones over here, pinkish ones over there – to build the walls. He says the house will be all stone — and colorful. He pointed out the saplings he’s planted around the periphery – mesquites that will one day help to shade the house, and flowering jacarandas that will in springtimes to come add more color. And of course a brilliant scarlet bougainvillea, destined some day to climb the walls.

He dreams that his granddaughters in Southern California, now too young to travel, will be able to spend their summer vacations with him, their proud abuelo, there. He will show them the beauty that’s at the heart of Mexico. He will get some horses so that they can all ride.

I learned, though, that he had suffered a heart attack and his heart is now operating at half capacity. So he has to take this house-construction slowly. Whenever he can get away from his work in the city, he buys a sack of cement, takes it out to his rancho-to-be, mixes it up by hand, and builds a little bit more of a wall. At this rate, he tells me, the rancho will be completed in five years. “That’s my 20-20 vision,” he says, smiling broadly, proud of his nuanced skills with English.

If I were a rich girl, I’d write a nice check that would help speed the process along. But I know that even if I could afford to do so, he would refuse it. He is a proud man, determined to build his own Paraiso, with his own strong hands, one colorful stone at a time. This is his ladder, and he’s climbing it.

8 thoughts on “Ladder to Paradise”