Talk about aging with grace. The artful carvings on the flat faces of large basalt boulders on a high, dark mesa in Velarde, New Mexico, may be thousands of years old, yet they’re still vivid and alluring. Exposed to heavy snows and rains, fierce winds and pounding sun for century upon century, they still endure. They still tell stories.

Just imagine it: At one time in the rocks’ long history, a period known as Pueblo IV, circa 1300 – 1600 AD when most of the carvings were made, certain members of these Puebloan people took it upon temselves to painstakingly chip away at the basalt while others in their group farmed in the fertile river valley below.

These stone carvers weren’t artists, per se, and their efforts wouldn’t have been seen as art; rather, today’s researchers believe, their handiwork held religious and ceremonial significance. In all, an estimated 75,000 of such symbolic images, known to us as petroglyphs, were carved in this vicinity. Mesa Prieta (“dark mesa”) is said to have the largest concentration of petroglyphs in all of New Mexico.

When Katherine Wells first came to this area from California in 1992 with her then-partner, Lloyd, she knew there were some petroglyphs on the 188-acre parcel they decided to buy together. But gradually, over time, in her hikes with their dogs on the rocky slopes of their property, she discovered hundreds of them. She was bedazzled. In her poignant and beautifully written memoir, Life on the Rocks: One Woman’s Adventures in Petroglyph Preservation (University of New Mexico Press, Albuquerque, 2009), she recounts:

I knew that in the real sense, the petroglyphs could not be mine. Such cultural treasures are not ‘ownable’ in the usual sense of the word. They are a legacy from those who came before on this land and belong to us all. … The best I could hope for was an opportunity to take care of the petroglyphs for a while, learn what I could, share with others who revere them, give access to the descendants of those who made the images. My instinct was almost maternal. 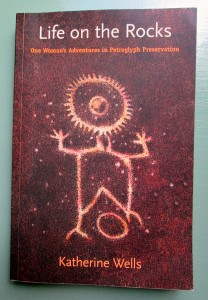 On a recent sunny Spring afternoon in her home on the mesa, I spoke with Katherine about her life now and what has transpired since her book was published. I learned that Katherine, 78, has many talents and passions — among them, art and poetry — but what has become known as the Mesa Prieta Petroglyph Project occupies most of her time.

“I’ve been doing almost nothing but the Petroglyph Project for several years now,” she told me. “I haven’t done any art to speak of for about five years because the demands of the project have been enormous. It’s like a baby that cries all the time, so I must take care of it. It’s pretty much a full-time job.”

According to the project’s new website, www.mesaprietapetroglyphs.org, the nonprofit Mesa Prieta Petroglyph Project’s mission is to document, protect, and sustain archaeological treasures in the northern Rio Grande Valley.

“By far the most exciting thing we do is education,” Katherine said. “We have a summer youth intern program for high school kids from the local Pueblo and Hispano communities, where we teach them how to record petroglyphs — the same petroglyphs their ancestors could have made. We also have an amazing 360-page STEM-based curriculum that we’ve built over a period of years. The kids, 4th- to 7th-graders, do a number of activities in the classroom, and then they come here on a field study day to see the petroglyphs first-hand.”

In 2007 Katherine donated 156 of her original 188 acres to The Archaeological Conservancy, and this land became known as The Wells Petroglyph Preserve. The Preserve represents the most concentrated area of petroglyphs on the mesa and is on the National Register of Historic Places and the New Mexico State Register of Cultural Properties.

Among the many honors Katherine has received for her work was last year’s “10 Who Made a Difference” in New Mexico. But she remains humble.

On a walk back up to her house, after a tour of the nearby petroglyphs, she told me, “I feel very blessed that I was able to come here and do what I’ve done. I happened to have the skills I needed and enough resources and enough energy to start what needed to be started. I’m a very lucky person.”

(Katherine’s memoir, Life on the Rocks, is available from Amazon and elsewhere. For more information about the project, be sure to visit: www.mesaprietapetroglyphs.org.)

4 thoughts on “Katherine Wells: Life on the Rocks”