When I lived in southern Africa in my mid-twenties, I learned that springtime was known as “jacaranda time.” Majestic jacaranda trees lined the broad avenues of the capital (then Salisbury, Rhodesia, now Harare, Zimbabwe) and came into bloom in October and November each year – springtime in the southern hemisphere.

The city of Salisbury, when I lived there, from 1969 to 1972, was rightly and proudly known as “the city of flowering trees.” There were flame-red flamboyants, delicate-pink mimosas, and sunny-yellow cassias, among many other colorful tropical flowering trees, lining the streets. But I was most captivated by the jacarandas.

Growing up in New Jersey, I’d loved the dazzlingly colorful fall foliage, and the fragile, Eastertime-flowering dogwood tree in our front yard. But I’d never seen trees like these jacarandas in southern Africa: toweringly tall and strong, like oak trees in their regal bearing; yet, when in bloom in October, fancifully dressed in frilly gowns made of pale-purple, bell-shaped flowers.

Then, in November, as I wrote in my memoir of that time and place, “when the rainy season began, the purple bells fell along the wet sidewalks, mirroring the glamor of the trees” (Somewhere Child, Viking Press, 1981).

What impressed me most and inspired me then about these jacarandas was the juxtaposition of their soaring strength and their seemingly fragile beauty.

Now, here I am, nearly five decades later, in the central mountains of Mexico in early spring. And what do I find? It’s jacaranda time! I feel as if I’ve come full circle.

In April and May (springtime in the northern hemisphere) the beautiful colonial city of San Miguel de Allende is dotted with an added color on its already color-filled palette – purple jacaranda (pronounced “HACK-ah-ronda” here) trees in bloom. Now, on my daily walks and explorations, I take pictures of these glorious trees wherever I go: 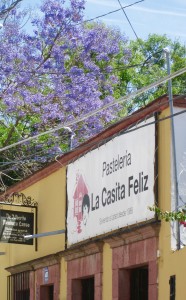 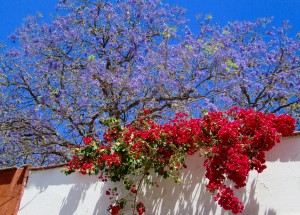 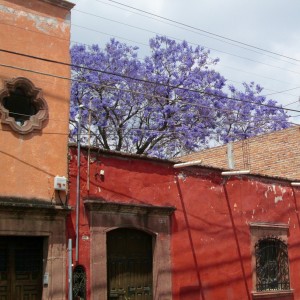 Returning home from a recent walk, I did a little research (thanks again to Google, which didn’t exist when I lived in then-Salisbury) and learned that jacaranda trees, native to South America, have been planted widely in Asia, South Africa, Zimbabwe, Australia, and other tropical and subtropical regions. Obviously, being tropical trees, they don’t like cold weather. (I can relate.) “Small Jacaranda trees can grow in shade, but more mature trees need more sun,” I read.

And here’s the most relevant and inspiring takeaway for me:

“Only older jacaranda trees will bloom.”

Yes, age can certainly be a plus after all.