When I was in the Peace Corps in Gabon, Central Africa, I was referred to as a “European” (meaning “white,” as opposed to “African,” or black). When I lived in Mali, West Africa, little children would point to me and call out “Tu-bab!” (white person). In New Mexico, where I lived for fourteen years, I was referred to as an Anglo (white, non-Native, non-Hispanic person). Now, here in Mexico, I’m a “gringa” (the feminine form of gringo – a white, English-speaking foreigner).

I’ve never much minded these labels. I’ve been an outlier most of my life, even in my home town in northern New Jersey, so I’m used to being viewed as “other.”

This vantage point, as an objective outsider, has made me feel like a natural-born cultural anthropologist, studying the locals’ way of life wherever I happen to live. It seems all my life I’ve been endlessly fascinated by the similarities and differences in human expression from one country to another – language, cuisine, dress, music, dance, architecture, art, and on and on.

And beyond that, I’ve always wanted to know: What makes some people stay put all their lives, generation after generation, in the countries of their birth? (Because they’re content where they are and they can afford to remain – or they’re too poor to move?) And what makes others dare to pull up stakes and strike out for unknown territories? (Because they’re driven by necessity, real or imagined – or because they want more?)

Peace Corps service was perfect for a person like me, because I got to live among people in a far-off land, off the beaten track, on the ground, for two, solid, enriching years. We Peace Corps volunteers arrive at our remote posts sleeveless – with no political or religious agendas, no judgment, no savior complex – with eyes, ears, and hearts wide open and ready to learn. In those two years, we find we begin to break through cultural barriers and come to see the world from the locals’ points of view: An invaluable, indelible life lesson that has practical future uses.

Which brings me to the point of this post – the here and now.

Last week I saw an excellent documentary at the Biblioteca here in San Miguel de Allende, Mexico, called “Gringolandia.” In it veteran filmmaker Dennis Lanson, who himself has retired to San Miguel, explores the reasons why gringos have come to this once-sleepy-little-provincial town in the central mountains of Mexico and what effect these expats have had on it. As one of Lanson’s many honest and articulate interviewees put it: “What’s anyone’s place in an alien culture?” What are we gringos doing here?

Were we drawn by the beauty of the place? The fact that it was voted “The Best City in the World” by Travel + Leisure magazine last year (and before that, by Conde Nast Traveler in 2013; and even before that, the “best retirement destination outside the U.S.,” by Money Magazine, in 2003)?

Or is it the mild, nearly year-round spring-like weather that draws countless “snow birds” from the north and seduces them to stay? Or the lower cost of living (about half that of the States)? Or the slower pace, the natural charm, the kind, tolerant, warm and embracing Mexican people?

Or, more recently, the fact that Trumplandia has become intolerable to many?  As one tee-shirt I recently saw on the street states, “Keep Calm, you’re on the FUN side of Trump’s wall”: 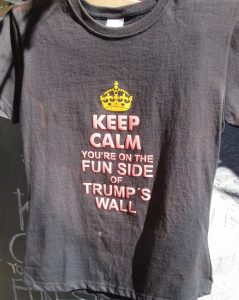 Lanson’s film, although eight years old, looks at all sides. “We don’t want to be taken as intruders,” one of his interviewees says. Another, a retired banker, has thrown his energy into the nonprofit Casita Linda that builds sturdy, new homes for poor families in the campo (countryside).

Other interviewees spoke about the challenges of learning a new language in one’s later years, fearing they’ll never have an in-depth conversation with any of the locals. Nevertheless, they plug on with their weekly Spanish lessons (as I do).

One spoke about some expats’ obvious “self-invented second chances.” Another shared her views about wealthy American developers and the changes – not necessarily for the better – that they’ve wrought.

As with all human beings everywhere in the world, there are givers and takers. Here, there are expats who give back to the community that has kindly adopted them, and those that exploit it for their own gain and attempt to bend it to their will.

One interviewee echoed my own belief learned from my Peace Corps service: “There is no way to fully penetrate another culture,” he said. “We just must be respectful guests.”

I came away from this documentary thinking that everyone who’s considering emigrating to or retiring in another country — especially, of course, this charming city in Mexico — would be wise to see “Gringolandia.” Filmmaker Lanson told me afterward that WOW readers could obtain the DVD of “Gringolandia” directly from him; he will ship anywhere in the world. Contact him at dlanson19@gmail.com .