More than thirty years ago, when Antonette and Joe Lim, originally from the Philippines, settled in San Miguel de Allende, Mexico, they decided to give back to the community by forming a family charity called So Others May Eat (S.O.M.E.), to help nourish the elderly poor here.

Their first S.O.M.E. hot meal, served on a Wednesday afternoon in February 1989, drew eleven elderly locals. The gathering soon grew to fifty and eventually to the 180 to 220 who attend today.

In its thirty years of existence, S.O.M.E. in San Miguel has served more than 400,000 meals. What’s more, in 2010 Antonette and Joe Lim were nominated for CNN’s “Heroes of the Year” award.

The Lims’ youngest daughter, Dr. Grace Lim, a physician in San Miguel, has continued her parents’ charity after their passing, with the financial help of her three sisters who live in the States, as well as from generous donations from others. The main focus of the program remains providing a Wednesday luncheon for the elderly who attend the weekly gathering.

According to the S.O.M.E. website, www.soothersmayeat.org , “In a sincere demonstration of respect and humility, the attendees are greeted, seated and then served a hearty and nutritious three-course meal. These meals are prepared by a small dedicated staff and served mainly by local, national, and international volunteers. … The weekly event is accompanied by music, songs, dancing, and prayer – a truly heartfelt and interactive experience for everyone involved.”

This past Wednesday I had the honor to be one of the more than sixteen volunteers at the S.O.M.E. Mothers’ Day luncheon held, as it is every week, in the sunny courtyard behind the Parroquia de San Miguel Arcángel church in the heart of this old colonial city, which is known as “La Corazon de Mexico” (the heart of Mexico).

“Christmas is nothing here, compared to Mothers’ Day,” one of my fellow volunteers confided in me as we prepped for this special gathering. I soon saw for myself that Mothers’ Day in Mexico – el dia de las madres, always on May 10 but celebrated two days earlier this year at S.O.M.E. — is BIG, bigger, even, than it is in the States.

Here are a handful of photos from this Mothers’ Day event (which drew more than 220 attendees), which I took between various assignments (slicing cake, cutting up fruit, plating salads, serving beverages, dishing vegetables…), to help you imagine you were there with me: 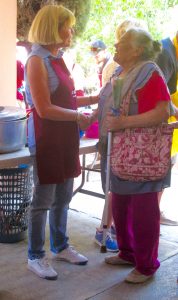 Feliz dia de las madres to you all – wherever you may be and whenever you happen to celebrate it!

[For more background on S.O.M.E. in San Miguel, be sure to watch this delightful and informative seven-minute YouTube video:

8 thoughts on “For the Mothers”