For Delma Barron of El Paso, Texas, family is paramount – not just her blood family, of which she is immensely proud, but also her chosen family, such as her quilting “sisters.”

On a recent visit to El Paso, to give a talk to Delma’s quilting guild about my Mali memoir, How to Make an African Quilt, I had a chance to sit down with Delma in her spacious home — after admiring her impressive quilt collection — and talk with her about what matters most. 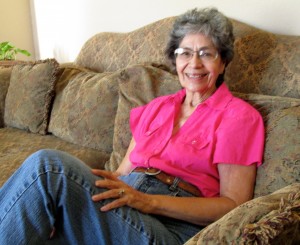 “I come from a very large family that has been very supportive to me and has provided me with excellent role models,” she told me proudly. “I like the way they’ve lived and how they’ve viewed life. I want to be like them – to have a good outlook and live a good older life – because I plan to.”

Delma, at 77, would be considered a youngster in her long-lived family.

“My great-grandmother was around 100 when she died,” Delma said, “and she had seven children, most of whom lived to close to or past 100. Also, on my father’s side, his parents were in their 90s when they died.” 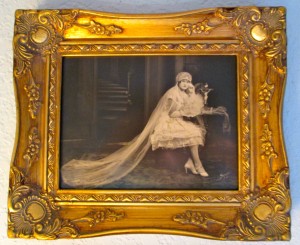 And Delma’s roots in the region go deep. The family of her maternal grandmother, Petra Jaime (pictured above, in 1909), was from the St. Angelo, Texas, area and had been living there for more than 200 years. In fact, one of Delma’s countless cousins, George, a genealogist, just learned in his research that a distant descendant, Juan Sotelo, born in Mexico City about 1598, was the grandson of Diego Arias Sotelo, one of the first Sotelos to come to Mexico from Spain, who was married to the granddaughter of Montezuma.

“A lot of us in the Mexican-American cultural group can say that we’re descended from the Spanish Conquistadors and the Aztecs,” Delma said, “but not too many have actually traced that lineage the way my cousin George has – all the way back to 1200 A.D.” 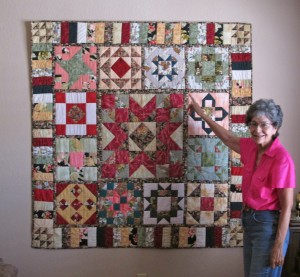 Delma’s lifelong love of quilting — she has made “over a hundred” bed-size quilts in her life, she told me (one of which, “Japanese Medallions,” can be seen above) — is closely tied to her love of family.

“I was raised in a quilting family,” she said. “My mother and my aunts quilted; my grandmothers on both sides of my family were quilters. My great-grandmother was a quilter. I learned to love quilts from them – the value of their warmth, both physical and emotional.”

When Delma showed me a hall closet in her home filled with folded quilts made by her mother, her grandmother, and her great-grandmother, she patted their exposed edges lovingly.

“They’re rather fragile now,” she said. “They’re not show quilts, but to me they’re heirlooms. They’re precious because they’ve come down through my family.”

Each month Delma and her guild’s sixty-plus members — of all ages — meet for their regularly scheduled meeting, when creative projects and ideas are shared, and sometimes guest speakers are invited. Then, every Monday a smaller group of quilter friends meets separately, a little like an old-fashioned quilting bee.

“These women are my family,” Delma told me, “not blood family, but family nevertheless. We’re there for each other. We help each other. It’s a marvelous support system.

“I think it’s really important for people to find friends whom they can relate to, share with, and laugh with. These friends become family.”