At that time, which, thankfully, was a long, long time ago — when Brontosauruses roamed the plains and Neanderthals ran the country – which is to say the 1950s, the career options open to American girls were these: grammar school teacher, secretary, or nurse. (The boys’ options were unlimited, of course.) But I had no interest then in entering any of the three doors open to me.

In eighth grade, I remember, we were given the assignment to write an essay on what we wanted to be when we grew up, and I – always marching to the beat of her own, personal, little drummer – chose to ignore those three options and write about the only path that beckoned me. I wrote that I wanted to be a “Home Maker.”

I don’t have a copy of that essay, to be sure, but I have an inkling of what I tried to convey in it: I said I wanted to devote my life to making a home – filled with love and peace – for my future family. (Obviously, I must have assumed I’d be married to a sweet and loving guy with a good-enough income to support my dream job.)

In that essay assignment I’m sure I stressed the differences between the words “house” and “home.” At that time, I lived in a sturdy, solid, red-brick house (with a roof that didn’t leak) in a nice suburban town with a good public school system. But if “home” is defined as a “congenial environment,” “a place where a person feels safe and secure,” filled (as I could only imagine it) with love and peace, I felt home-less growing up there. So I wanted to learn how to create such a place in the future, and I considered this a high calling.

Since then — despite all the heartbreaks, losses, and house-moves too numerous to recount now — I’ve tried to make everywhere I’ve lived, to the best of my ability, homey. And the nicest compliment anyone might ever give me when invited to my place is to say, “It’s a HOME!”

That’s what happened last week when my former downstairs neighbors here in San Miguel de Allende came to visit my new-to-me apartment to see how I was doing. Bill walked in, took one look around, gazed upward at the high ceiling, raised his arms in a priestly gesture, and announced, “It’s a HOME!” He had no idea how deeply happy his words made me.

It’s not that the studio apartment I’d recently left, where Bill and Sy and I were part of a small, friendly COVID “pod,” was unpleasant. On the contrary, it was, to me, like a boutique hotel — beautifully built, designed, and decorated — where the rates had been lowered to affordable levels due to the pandemic. It was, in fact, charming, and I had been charmed.

But it took me a year to understand what my problem was: There was no room in that studio for me to make it my home. The walls were painted a hell-fire orange (one of my least-favorite colors), and the artwork everywhere looked to me like depictions of hallucinations. Except for the bed, I found the no-doubt-costly furniture uncomfortable. And the bathroom was airline-tiny.

Initially, living there I felt as if I were on a long, unexpected holiday, staying at a really nice hotel. But as the months wore on, I kept looking at my watch, thinking it would soon be check-out time.

Here at my new place, as Bill so rightly sensed, now that I’ve settled in, I have a home. It’s one big room with lots of natural light, a good cross-breeze, a soothing creamy-sunny color on the walls, and my own eclectic decorative sense: handmade wool rugs from Oaxaca, Mexico, which I bought here in SMA; patchwork wall quilts I made in Segou, Mali, when I taught quilting there; some furniture that was already here; some new items I bought with my U.S. Government stimulus check (Thank you, Joe Biden); some gifts from friends; and a bookcase filled with favorite books, of course.

It’s a mélange of old and new, valuable only in a sentimental sense. A tour of it would take under a minute, but it would provide a synopsis of my life. It’s a simple place – a far cry from a dazzling room in a boutique hotel – but it is uniquely mine. I am comfortable and at peace here. It’s a refuge. As Bill said, “It’s a HOME.”

Here are some recent photos to prove it: 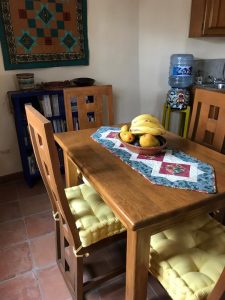 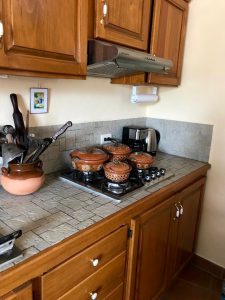 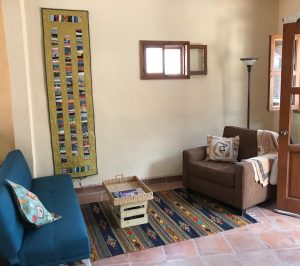