Some years ago, when moving to Mexico was merely a twinkle in my eye, I turned to books for guidance. Books have always been my go-to’s for all things life-decisions-related. You can count on a good book — one that’s been carefully researched and written, edited and fact-checked — to be a solid source of info, I’ve found. Friends and acquaintances might give their opinions, which, of course, I value. But for me, books have the last word on most decisive issues.

While I was still living in Taos and teaching at the University of New Mexico branch there but gradually planning for retirement, I researched books on the subject of retiring in Mexico and ordered five from Amazon. Each of my chosen books spoke to me, in different ways, and each contributed to my informed decision to retire here: a decision I’ve never for one moment regretted making.

New York Times’ best-selling author Tony Cohan’s classic On Mexican Time: A New Life in San Miguel (published in 2001), was the first of those five I read. This evocatively written memoir tells the story of how he and his then-wife came to SMA from Los Angeles for a visit, quickly absorbed the town’s sensual ambiance, eventually found and refurbished a crumbling 250-year-old house, and became entwined in the daily drama of Mexican life.

As one reviewer put it, and I agreed: “I love Tony Cohan’s writing style; the beautiful descriptions and overall fluidity are like a magnificent, magical journey through Mexican time and space.”

Carol Schmidt and Norma Hair’s Falling in Love with San Miguel: Retiring to Mexico on Social Security(2006), spoke to me then and resonates with me still. In a warm, friendly, conversational tone, these two women share their their joys, their mistakes, their problems, and their new outlook on life in this very personal love song to San Miguel. They describe in detail the festive fiestas, their comical efforts to speak Spanish, and their new views on world history from learning Mexicans’ point of view.

As I’ve found to be true in the five-and-a-half years I’ve lived here, Schmidt and Hair’s book describes living a far better life in SMA than is possible anywhere in the U.S. on Social Security, even in a place where people say it can’t be done. They actually did it, and in this invaluable book they explain how.

From the Insiders’ Guide series, I found Choose Mexico for Retirement, 10thed., by John Howells and Don Merwin (2007) to be a no-nonsense, down-to-earth, solid source of information – a good way to compare and contrast the various Mexican destinations. As the book’s jacket touts, “It’s an essential reference for active retirees or anyone looking to start the next chapter of their lives in this just-over-the-border paradise.”

Longtime San Miguel resident and prolific writer John Scherber’s book San Miguel de Allende: A Place in the Heart (2013) provided me with many voices and points of view. Each chapter was like sitting down with and listening to people who made their retirement in SMA happen.

Scherber interviews about thirty people – Americans and Canadians – to learn their stories of why they settled in Mexico and what it means to them. In these interviews they talk candidly about the obstacles they found in their paths and how living here has changed their lives – most, for the better.

The fifth book I read that convinced me to move to SMA was Carol Merchasin’s delightful collection of essays, This is Mexico: Tales of Culture and Other Complications (2015). With a clear eye for details, a warm heart for Mexico, and a lively sense of humor, Merchasin gives readers an insider’s look at the joys, sorrows, and challenges of everyday life in this magical and mysterious country.

Many of her passages are so laugh-out-loud funny I had to read them aloud to my UNM Creative Nonfiction Writing students as excellent examples of humorous writing. Here’s just a small sample, from her chapter, “Ser, Estar, and the Charms of Living in Spanish”:

“…Similarly, Señor Roberto [she facetiously refers to her husband Robert as Señor Roberto throughout] once told our lawyer (our abogado) he was grateful to have him as our avocado. If I had been the listener, I would have been rolling on the floor laughing. Instead, our lawyer smiled as though he appreciated being held in the same general esteem as guacamole.”

I loved Merchasin’s voice in this book so much that I wrote to her from New Mexico, and we ultimately became SMA friends.

A number of good books have been written on the subject of retiring to SMA, Mexico, since I moved here in late 2015. But the new one I would recommend most highly now is A Lifetime to Get Here: San Miguel de Allende, written by my friend Cynthia Claus and published last year. I even wrote this blurb that appears in the front matter of her book:

“Come with Cynthia in the pages of A Lifetime to Get Here as she explores the wonders of San Miguel de Allende, an old colonial city in the mountains of central Mexico. Walk with her each step of the way and experience her many adventures and discoveries. Learn the history and lore of this magical place. Be dazzled by the colorful pageants and spectacles. Taste the world-famous food. Admire the timeless beauty. Meet the warm and welcoming people. But be warned: In reading A Lifetime to Get Here, you’re likely to fall in love with San Miguel as Cynthia did and pack up to move here too.” 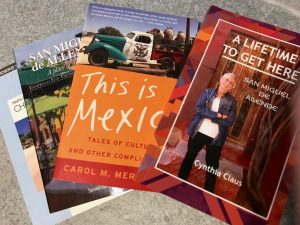 At the risk of sounding like an old school marm, I have two words for people who turn solely to social media for answers to their many questions about retiring in Mexico (…What is it like to live in San Miguel? What is the comparative cost of living? Do I need to speak Spanish? Can I get by on my Social Security income? …). Those two words are: READ BOOKS.