Some of us sometimes – and this includes me most of the time – tend to wax rhapsodic about the joys of living here in San Miguel de Allende, Mexico. I often swoon, especially in my blogposts, over this old city’s beauty, charm, climate, peace, hospitality, affordability, and more. As a single, older American woman living mainly on monthly Social Security payments, I’m quite sure I couldn’t live as happily anywhere else in the world.

And just imagine this: San Miguel — perhaps all of Mexico — is a place where older people are uniformly treated with dignity and respect. Ageism seems to be unheard of here. How refreshing for those of us who’d felt sidelined, even discarded, in the States after reaching retirement age.

But (there’s always a BUT, isn’t there?) this week I feel the need to point out one of the few, in my opinion, downsides of living in SMA. This downside can be found outside, down at your feet, at street level. It’s the sidewalks.

Anyone interested in considering moving to SMA should consider this: Walking the sidewalks can be treacherous if you don’t actively, consciously watch every step you take. Things that you wouldn’t find in any American city’s sidewalks — because the U.S. is such a litigious country — such as pieces of rebar or wires sticking up for who-knows-what reason, and holes that appear out of nowhere, are common encounters. One false step and you’re in the orthopedic surgeon’s office in a lot of pain.

You see, some of the things that make this charming, old, colonial city in the central mountains of Mexico so charming are the same things that make it rather challenging for getting around on foot: the hilly terrain; the narrow, cobblestone streets; and the uneven, slender and sometimes slippery old stone sidewalks. Most visitors and all residents are aware of these pitfalls and dress their feet accordingly. Sturdy walking shoes are de rigueur. But spills still happen.

Recently I learned that a friend of a friend here, a single, retired professor from California, who visits SMA every year at this time, took a bad fall on the sidewalk near his rental apartment in centro two weeks ago. Although he didn’t break anything,  gracias a dios, he seems to have damaged his shoulder and is now severely hampered by a sling. His visit this year will be overshadowed by the fact that he cannot easily function normally (bathe and dress himself, for example) for some weeks. 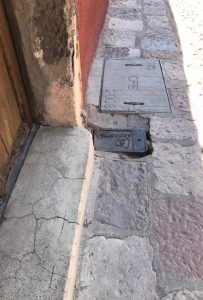 Another friend told me over lunch this week that she’d learned of an elderly American couple who are keen on coming to SMA to live. The husband is admittedly overweight and has what he calls a “trick ankle” that “buckles” on him frequently. His wife has recently had neck surgery, making it hard for her to look downward from a standing position. Nevertheless, this couple is determined to live in centro so they can have easy access to “all that’s going on” – outdoor events, restaurants, shops, and so on.

Alas, much of centro is always cordoned off from vehicular traffic, so walking is one’s only option; and walking, especially at night on the sidewalks, would likely be more than difficult for this couple. Their dreams, like some of SMA’s sidewalks, might just crack: 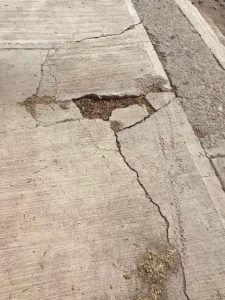 The reality is San Miguel, for better or worse, depending on your attitude toward walking, is a walking town. Yes, outside of the pedestrians-only center, there are countless taxis and many bus options. But if you want to see the sights, many of which are centered in centro, you’ll need to do some walking.

So here are my top-of-the-head suggestions for everyone considering a stay in SMA: