When my artist friend Colleen proposed a bus adventure, I was all in. We could spend an afternoon, she said, riding local buses to and from their farthest destinations — just for the fun of it, for a change of scene, to expand our horizons. Sounded good to me!

This is the kind of adventure just about anyone can take anywhere in the world where there is a reliable urban bus system. My friend Barb here recently told me she did this while traveling in Costa Rica not so long ago. One day she and her travel buddy took a bus to who-knows-where, she told me, and got off at the end of the route — a place without a plaza or town square, just a church.

“We wandered down what appeared to be the main dirt road,” Barb said. “Lovely coffee plants cascaded over each side of the road and up the sloping hills. We ended up meeting one of the coffee growers and having a lengthy conversation with him and his daughter, who spoke a bit of English. It was a great adventure!”

Loving this concept, Colleen and I made a plan to meet on the street one day this week, at a specified time, but without a firm travel plan.

Here in San Miguel de Allende, Mexico, the city buses are large, sturdy (mostly Mercedes-Benz), clean, and well maintained. They’re also only 8 pesos, or $0.38 USD per ride. Since both Colleen and I are on budgets, this was the kind of adventure we each could afford to take.

As far as we could tell, a physical map of SMA’s bus system doesn’t exist. But, I later learned, WeExpats published an excellent article online two years ago (August 15, 2019) titled “Bus Routes in San Miguel de Allende,” which covered all of the available routes at that time: https://weexpats.com/bus-routes-san-miguel-de-allende/ . Perhaps the routes haven’t changed since then.

This WOW post takes readers on the route that Colleen and I ultimately chose for the first of what may turn out to be a long series of fun bus adventures: 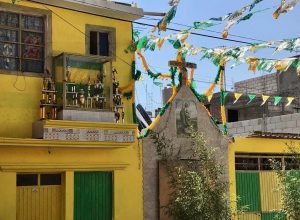 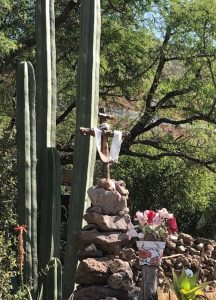 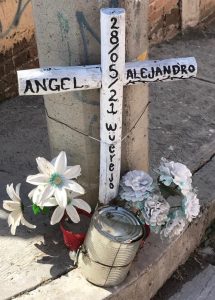 On the return trip from San Luis Rey, the bus snaked through el centro, picking up and dropping off more passengers, then headed south, past the grand supermarket La Comer and down the highway some distance to an outlying colonia (neighborhood) called Don Diego, then turned back onto the highway going north and back into town.

In all, the trip – like a long, figure-eight-shaped route — took two hours and gave Colleen and me a clearer understanding of the way more people here live, as well as a better view from the bus’s higher vantage point (than we would have had in a car) of the beautiful Mexican landscape beyond the city’s limits. All for 8 pesos a ride.

For more on Colleen and her artwork, see my WOW post of July 18, 2020, “Garden Ladies”: www.bonnieleeblack.com/blog/garden-ladies .

30 thoughts on “An Eight-Peso Adventure”