At this time of year — for thousands of years — human beings have found special ways to remember and celebrate their departed loved ones. Some say this universal impulse stems from a belief that the membrane between this world and the next is most porous in this season – the end of harvest time and the dawn of winter — and those who have passed on are more accessible to us then. During this time, we can — or think we can — see the otherworldly more clearly.

According to this year’s calendar in front of me, these celebrations fall like this: Halloween, October 31; Todos Los Santos (All Saints Day), November 1; and Dia de Los Muertos (Day of the Dead), November 2. Each of these days has ancient roots and modern interpretations.

Thomas Mackay, writing for the Scottish daily newspaper, The Scotsman, says, “Halloween may be celebrated worldwide nowadays, but it originated with the Celts, one of Scotland’s ancient ancestors, who celebrated the frightful festival with customs completely unique to what we see today.”

Samhain, as it was known then, was, says Mackay, “serious business in ancient Scotland as it marked the thinning of the veil between our world and the spirits’, which posed the very real threat of ghosts or demons harming people or their land.” Halloween (Samhain) was recognized as an important time to ward off such paranormal entities before they could inflict damage.

In the Roman Catholic tradition, All Souls Day takes place on the day after All Saints Day, which is on November 1st. Where All Souls Day commemorates the souls of those who died baptized but without confessing their sins, All Saints Day commemorates church members who have died and are believed to have gone to heaven. The custom of trick-or-treating at Halloween can be traced back to the 15th century, when poorer Christians might offer prayers for the dead in exchange for money or food from wealthier neighbors.

Mexico’s Day of the Dead combines the ancient Aztec custom of celebrating ancestors with that of the Catholic All Saints and All Souls Days, which the Spanish conquistadores brought with them to Mexico starting in the early 1500s.

What began several thousand years ago among the indigenous peoples of Mexico, Día de los Muertos has since grown to become an enormous fusion of pre-Hispanic and Christian religious traditions – a colorful explosion of life-affirming joy meant to demonstrate love and respect for dead loved ones.

Often misinterpreted as Mexico’s equivalent of Halloween, the Day of the Dead is a time to welcome and commune with the dead, not fear their return in the form of ghosts or goblins. In fact, writes Aldo Ibarra, a lecturer on Mexico’s culture and traditions:

“The nationwide celebration of Day of the Dead holiday in Mexico has been recognized by UNESCO as a part of the Intangible Cultural Heritage of Humanity, a list of cultural practices around the world that the U.N. believes represents the cultural heritage of the human race.”

Despite what the calendar says, Mexico’s Day of the Dead celebrations are never confined to one day. No, it’s not just one, singular, Halloween-like day; this celebration, in Mexican style, lasts for days. It’s a time of joyous events filled with music, dancing, bright colors, art, sweets, and singing, in which the entire community participates.

These are the days when boney old Catrinas re-emerge from their skeleton closets, when bright orange marigolds festoon the markets and doorways and park paths, when families erect elaborate altars in honor of their long-dead loved ones and tempt them to return for a brief visit by offering favorite drinks and food.

In addition to the orange color and pungent fragrance of marigolds everywhere, the sweet scent of freshly baked pan de muerto, or bread of the dead (brioche), shaped in the form of skulls and bones, wafts from local bakeries to tempt the still-living.

Calacas (skulls) stare at you from the least expected places: 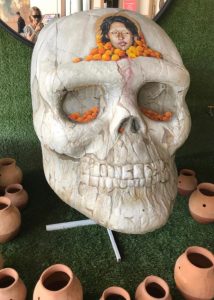 And altars (ofrondas) are set up everywhere to honor the dead:

Yes, these are the days of happy, other-worldly wonders, not to be missed.

To see more Day-of-the-Dead-themed art and displays — if you’re in San Miguel — be sure to take part in the Art Walk at Fabrica la Aurora, San Miguel’s art and design center, on Saturday, October 29 from 4 to 8 pm.

To make your own Day of the Dead bread, follow the recipe in my blogpost of November 1, 2019: www.bonnieleeblack.com/blog/day-of-the-dead-bread/ .

To learn more about Day of the Dead celebrations in San Miguel de Allende, read this week’s Atención article:

To learn more about the origin of Halloween, go to: https://www.scotsman.com/heritage-and-retro/heritage/halloween-in-scotland-13-ancient-customs-and-concepts-of-celtic-halloween-lost-in-todays-world-remembering-samhain-3887789?fbclid=IwAR1WDR5lz1sAZwWVNSPlUGvWhU2byP1e0X395EtICmXv8KzYe-_61hUq7CA